Not As Sharp As It Sounds

I was excited about this film ever since I saw the terrific mock-trailer during the Grindhouse(2007) film, which I saw in theaters. It was easily the funniest part of the film and it was such a joy to see Danny Trejo, who had made a career out of playing assorted henchmen and bad guys, actually portraying the lead for once. It looked delightfully over the top, as Trejo's titular character unleashes all manners of mayhem and destruction upon those who double crossed him. The tag line was terrific as well: "If you hire Machete to kill the bad guys, you better make damn sure the bad guy isn't you!" 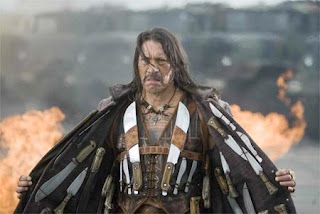 When it was announced that this was indeed going to become an actual movie, anticipation went through the roof. Of course, like most modern Hollywood product, it became watered down and the simplistic nature of it's premise was practically tossed out the window. More stars were added to the cast and the new trailer was decidely toned down, focusing on too many characters other than Machete that none of us were particularly interested in seeing in the first place. Seeing Michelle Rodriguez in the only role she ever plays, that of tough girl who uses guns, was not exactly exciting, even if she was in a revealing outfit and sporting an eyepatch. Plus, Jessica Alba is such a poor actress that adding her to the film felt like an albatross around the neck of the film, as she appears to be far too mainstream to fit into the realm of grindhouse cinema. Sure enough, the film would have many of the same problems as well. 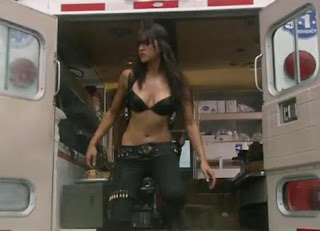 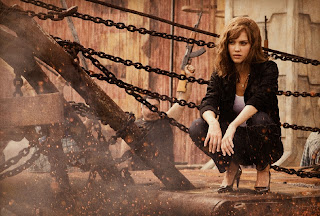 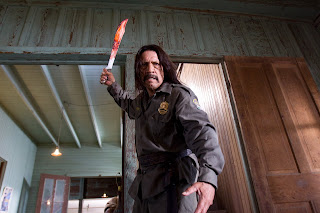 The original plot was a take on one of those 70s plots, where a hitman is double crossed and left for dead, only to heal and come back for revenge. That's a pretty simple story, so what do the filmmakers do? They decide to instead make a really convoluted plot about illegal immigrants and border restrictions brought on by a coalition by the US government and Mexican drug lords. Most of what made the film initially seem so appealing, had vanished to be replaced by far too many characters and mostly limp action sequences with the added crutch of CGI. Rodriguez is an interesting talent who can perform many tasks, rather well. The guy can direct, write, produce, edit and put together professional looking product for cheap. There's alot of respect to be had for Rodriguez and his filmmaking talents, but his films have also been rather hollow in the last decade and seem to be suffering from a combined lack of growth in the writing and characters and a lack of focus. Rodriguez makes fast films and that's not necessarily a bad thing, except that characterization is crucial, even in the silliest of premises. While the guy appears to adore the 70s grindhouse scene, he seems to have taken very little from the film's asthetics. Consider, the surprising amounts of character to be found in trash like Coffy(1973) or Mr. Majestyk(1974) and compare them to the near non-existant writing to be found in his films, Machete being one of them. 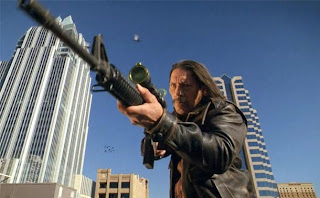 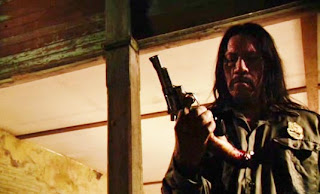 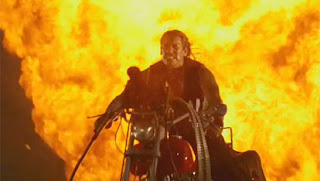 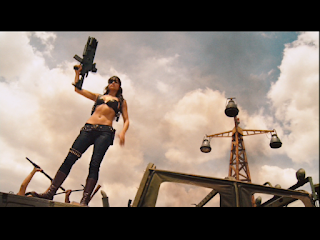 Danny Trejo is way cool as the title character, but unfortunately, takes a backseat to a plot that seems to smother his character's struggles, replacing it with far too many supporting actors. Michelle Rodriguez portrays a taco stand worker(!) who is leading a rebellion to help Mexican immigrants and really dosen't add much to the film, except appear in an eye patch and go through the tough girl schtick that she seems to portray again and again. Jessica Alba is a police officer who sympathizes with Machete and joins his fight against the gangsters and politicians who set him up. She's not as terrible as she can be and certainly appears more attractive with her brunette hair, bringing back memories of her television series, Dark Angel. She also appears in a shower scene, but fellas, it's all cgi, so no need to get too excited.
Jeff Fahey makes a very good villain and should have been the main antagonist, but is killed off pretty ordinarily and not even part of the final melee, which instead is a face off against a drug lord who murdered Machete's wife, played by Steven Segal, who has never advanced with his acting style, despite over twenty years in the industry.
I was happy to see Cheech Marin as Machete's brother, who happens to be a priest(!), but he's under-utilized and out of the story far too quickly. The biggest surprise in the cast was seeing Tom Savini, the legendary makeup artist, as a hitman who declines going against Machete. That's the kind of actor that is welcome in such a film, because the audience that will dig this sort of thing were raised on b-movies and would appreciate such cult figures more.
Robert Deniro and Don Johnson are also in here as villains, but don't really do much. Deniro hams it up big time and seems out of place as a Texas senator, but Johnson is a hoot and I wish he had a bigger part as an out of control border cop.
The film's most pointless character is probably Lindsey Lohan, who stars as the daughter of Jeff Fahey's character and appears nude most of the time, albeit covered up. That was a plus, but she dosen't add much to the film, appearing in a nun costume at the conclusion and toting a 44. magnum revolver, which she proceeds to fire with no recoil. She has about five minutes of footage and seems like so much else, out of place. 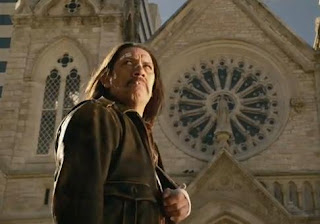 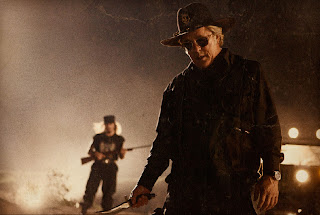 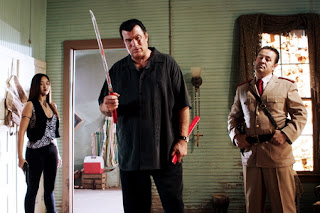 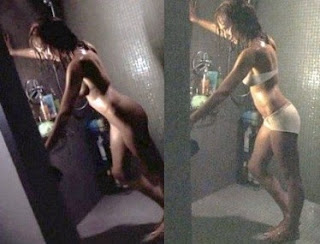 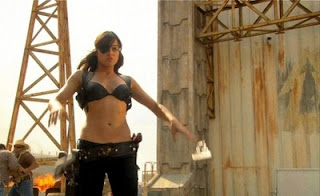 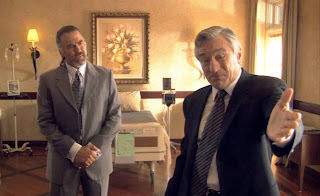 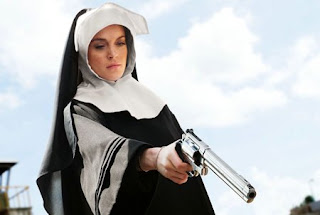 There's a few interesting moments, like a humorous pre-credit sequence that contains quite a bit of bloodshed and added titilation, as Machete is momentarily distracted by some fully nude senorita. That was certainly a fun way to open the film, but it lags down once the border is crossed and gets repetive and dull when Machete isn't hacking his enemies to pieces. We see the character improvise with many weapons including surgical knives that he uses to swing and hack, a revolver still attached to a chopped hand of a villain and a minigun that he attaches to a motorcycle. All the women are fairly sexy and are often wearing revealing outfits, the gun-toting nurses being a stand-out here. The exploitation elements here are fun, but also feel at times, forced and that's a shame that this couldn't have been made with more sincerity. The fun of such trashy cinema is that the filmmakers believe full-heartedly in what they are making without a whiff of condescension. Like the similiar, though funnier, Black Dynamite(2009), I felt the same sort of feeling with this. If I had seen this in High School, I would have undoubtably praised the hell out of this, much like I did with Sin City(2005), which was also a Rodriguez film. As an adolescent escapist fantasy, it's not all bad, especially in seeing the title character go through the motions of action and bloodshed, but it's just more junk food. It never has enough character and lines to make any of this all that memorable and the best parts of the film were already in the trailer. Could there be a lesson in all of this, like making a feature length movie out of a three minute trailer is a bad idea? Who knows, but all I know, is that original trailer still has so much potential and maybe it's better to just imagine our own interpretation in this case. 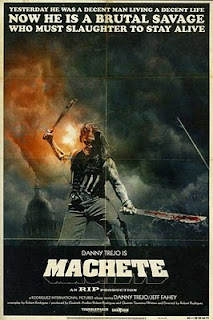 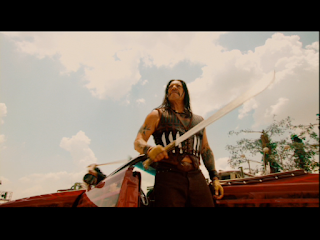 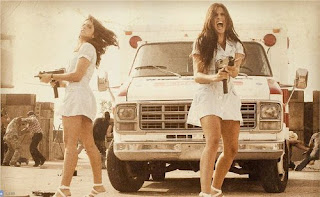 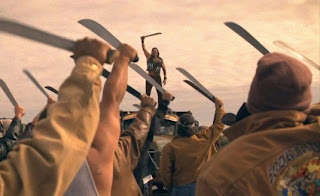 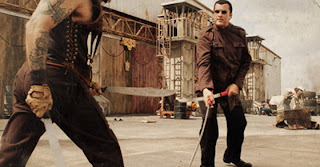