A Christmas Carol Worth Forgetting 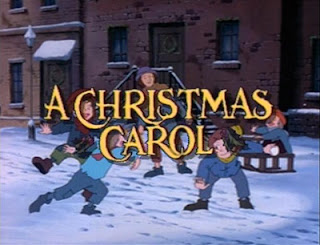 This past Christmas, I saw many versions of Charles Dickens' venerable classic. They ranged from the sublime(the 1951 version with Alistair Sims) to the absurd(A Muppet Christmas Carol.)
This low-budget animated adaption looks promising enough, but don't expect anything resembling either the 1982 Australian animated version or the earlier Richard Williams adaption.
For many kids that grew up in the 90s, the name "Jetlag Productions" is probably warning enough to stay far away from this adaption. That company was responsible for releasing several cheap knock-offs of popular Disney cartoons, including their own versions of The Lion King, The Little Mermaid and Snow White. They were even sold in the same clam shell cases that was the trademark of the Disney tapes, leading to much confusion among children and parents.
I saw several of these as a child and the impression they made upon me was not so swell. They were cheaply animated and largely forgettable, filled with poor voice acting and limited animation, and worse, truly insipid songs that were enough to grate on my last nerve.
Being the devotee that I am of the Christmas season and the Scrooge story, I purchased this cartoon on the cheap and decided to review it. Even at under an hour in length, it was quite the chore.

The limited animation was bad enough in the previous films, but made worse here, as very little detail was given for the requisite amount of atmosphere and terror that the story needed. It's plain and dull looking, and the voice acting is completely uninspired. Whoever voiced Scrooge was simply going through the motions, with a broadly portrayed English accent that sounds false throughout. If one cannot believe in the Scrooge in such a film, that's a bad sign.
It probably doesn't help that the filmmakers choose to eliminate 90% of Dickens' dialogue in favor of crude simplifications, that assume that the intended audience is stupider than they think. Considering even the Muppets were wise enough to leave a great deal of the prose alone, should really say something about this production.
The scene with Jacob Marley's ghost fares the worst. The actor voicing the ghost sounds like a child's imitation of a ghost, a fat ghost at that. You know what I mean? I had this image of a kid with a pillow under his shirt, deepening his voice and trying to do an impression of his grandfather. Can you see it now? Does that strike fear in your heart? Well, Scrooge is pretty disturbed, though it could have been a result of the appalling song that the wandering spirits are forced to sing outside his window. You know, the damned souls that must wander eternity, forever trapped in limbo, living a virtual Hell? Yeah, they get a song!
More wonder occurs throughout, as we witness the Ghost of Christmas Past and Present, each one less interesting then what was presented in Magoo's Christmas Carol(1962), another animated adaption that I kept wishing I had chosen to rewatch instead. Even that had retained the prose and atmosphere.

Oh, this is such a bad movie. I'd be surprised if anyone felt anything at the conclusion of this thing, other than the urge to eject it from the DVD player and hurl it out in the snow. I've seen many poor adaptions of this story, which sort of goes with the territory. The film has very little regard for the moral of the story or any emotional impact. It fails not like the rancid Jim Carrey adaption from 2010, which decided to assault the viewer with a cavalcade of 3-D explosions and extremely broad comedy, but rather by being so utterly devoid of life. There's just nothing to this film. One feels that if they were to touch it's weak, emaciated frame, it would surely dissolve into dust.
The ending, which appears to have been lifted from the 1970 musical with Albert Finney, depicts Scrooge taking the Cratchit family on a shopping spree, illustrating that previous film's biggest weakness.
Whoever released this film just had no clue.
Christmas is over, yes, but you may still have the spirit with you and may wish to return to this story again. Please, do so. There are many wonderful adaptions to be seen, and unfortunately, they seem to be only be able to be enjoyed during this season. Watch the 1935 version with Seymour Hicks, criticize the MGM adaption from 1938, love the Sims version and adore the Scott one. Heck, visit Magoo and the Muppets, as well, but no matter what, stay away from this one like the plague. I'm warning you, reader, lest you suffer the consequences of being haunted by the spirits of Good Movies Past. 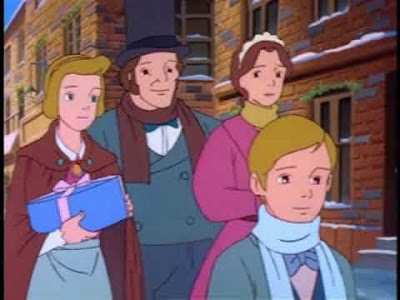 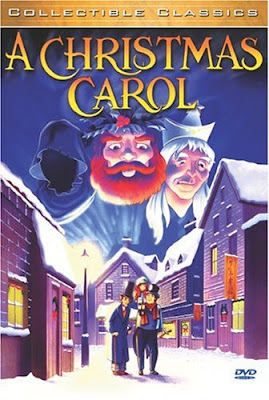 *I felt there was no need for a synopsis of the plot. You already know this story.
Posted by Batcat31 at 4:12 PM 2 comments: