The Master Of Mystery In A Masterpiece Of Weird Thrills! 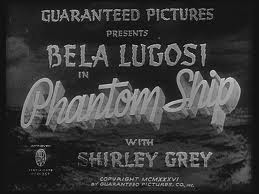 The mystery of the Marie Celeste remains one of the most famous of mysteries. The ship was found floating in the English Channel, having set sail in 1872, and was found a month later with no crew aboard her. Much speculation spread throughout the years, most of it ridiculous, including a ludicrous idea that the Captain and the First Mate staged a swimming contest and were eaten by sharks, while the rest of the crew fell overboard on a platform they devised to view the race!
The most famous suggestion is, of course, foul play, as many suspect that a murderer was aboard, who killed off the crew and threw them overboard. This was perfect fodder for mystery writers and especially, for filmmakers. During the 1930s, many studios wished to adapt the story(including MGM) and the property was finally settled at a young Hammer Studios, who would later make a name for themselves with several stylish Gothic horror films in the 1950s and 1960s.
They also acquired the talents of one of the world's foremost fright actors, in the person of Bela Lugosi, who stars in this film, named Phantom Ship in America and The Mystery of the Marie Celeste, overseas.
Despite, it's public domain status, it's actually one of Lugosi's most obscure roles and one of his most offbeat. Rather, than employ his trademark over the top villainy(like he did in that year's The Raven for Universal), Lugosi offers a much more restrained and subtle performance, displaying a level of sensitivity that the actor was rarely afforded again. The film was only a minor success and Lugosi was disappointed with it, though he really should not have been. It's actually something of a minor gem. 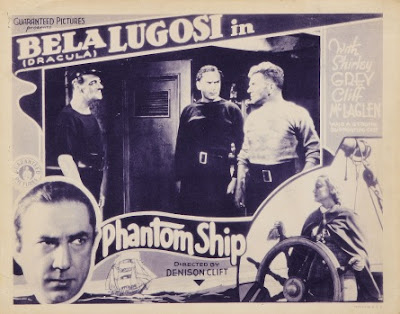 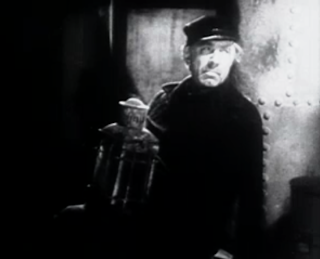 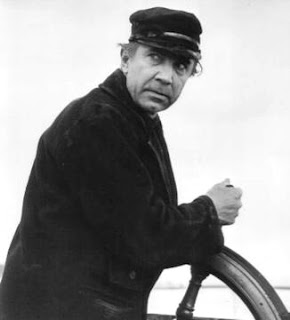 The film begins with Captain Benjamin Briggs(Arthur Margetson) discussing his upcoming voyage and how he has to round up a crew. He also reveals that he's taking along with him, his young wife, Sarah(Shirley Grey) who was once the girlfriend of Tom Goodschild(Dennis Hoey) who is Briggs' friend and helped finance the voyage.
At the local bar, where many of the sailors are rounded up, a strange one armed sailor enters and is at first believed to be a vagrant. He turns out to be an old friend of the owner of the bar, his named Anton Lorenzen(Bela Lugosi) and he reveals a sad story about how he was shanghaied and the kind of Hell he has been through. His friend lets him stay and suggests that he goes on the Marie Celeste, which is to set sail that night, so he can make some money. He is at first outraged, but agrees to go and we realize that there is something sinister in connection with that ship.
Meanwhile, Tom addresses to one of the men, that he would wish that something "happens" to Briggs, as he still wishes to get Sarah back and the plot thickens as a potential murder hangs over the ensuing voyage. Stranger still, Anton registers on the ship under a false name, being referred to as "Gottlieb" from then on. 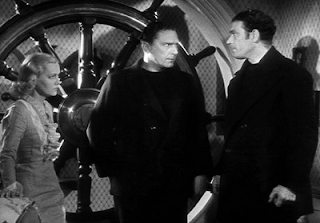 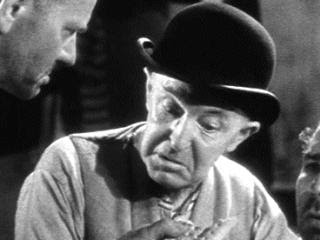 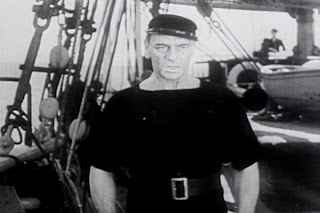 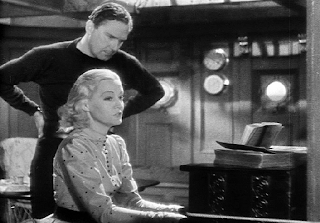 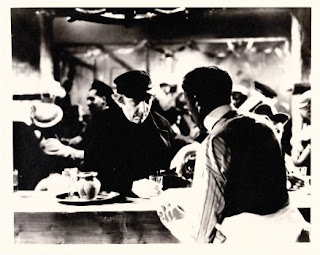 Several little things occur upon the voyage that indicate future danger. First, there's unrest among the sailors because of the rotten food, the biscuits being worm-infested. Second, there's a few on the ship who have been pressed into service, shanghaied, like Anton was. And third, there's Anton's black cat, which superstitious sailors believe to be a bad omen.
A storm occurs one evening and a sailor is killed, while another, attempts to rape Sarah, only to be stabbed to death by Anton, who repents for his sin, in a particularly emotional scene, that is out of character for Bela and is one of his best in the film.
Soon, murders begin to escalate and one by one, every man on the crew meets a nasty end. In one of the film's worst slips, however, Briggs and Sarah, who have been the focal point of most of the picture are dealt with offscreen and they're fates are left in the air! This is a bizarre plot hole and remains glaring  and hurts the film considerably. Finally, three sailors are left standing, including the First Mate, Bilson(Edmund Willard) and Anton. The remaining sailor believes it's Bilson and is shot for his troubles. Bilson, overjoyed, gets drunk on the cargo(which just happens to be whiskey) and proposes to take the ship and sell it, considering he's Captain. However, as it turns out, his memory isn't so great and Anton reveals himself to be a man whom Bilson had shanghaied years before and reveals his treachery. He shoots Bilson dead and throws his body over the ship and laughs to himself, before a knock in the head makes him realize his error and he runs around in frightened confusion,before he plunges into the sea to his death. 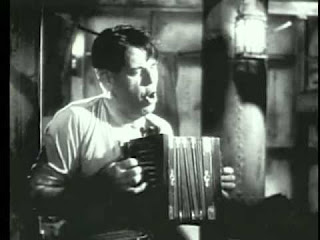 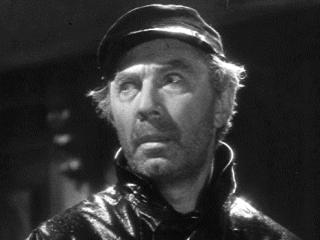 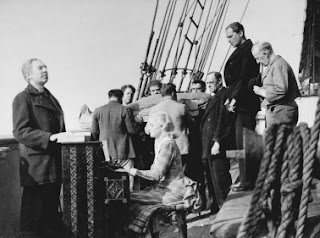 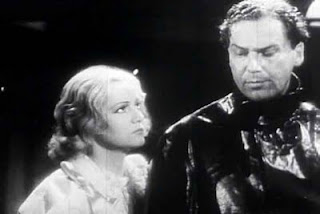 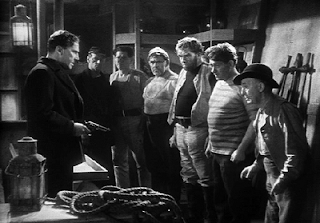 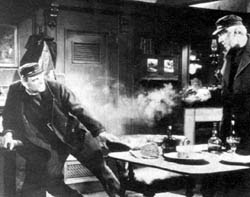 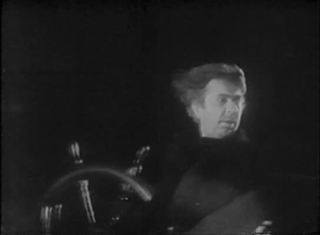 Phantom Ship is a flawed, but interesting curio-piece, and only the second for Hammer Studios. It's rough around the edges, especially towards the end, with the callous dismissal of two primary characters and a far too rushed climax. Still, the film is entertaining, if for a decent cast of rogues as the sailors and a performance from Lugosi that is something of an essential.
Lugosi manages to evoke much sympathy as the tormented Anton, providing a subtle level of frustration that ranks among his most haunting. When he reveals to Sarah in the film, how he came to be, it's a beautiful bit of acting, though it may be a tad uncomfortable for the actor's fans, as his speech seems to echo what the later, drug-ridden Lugosi might have said in his later years, those torturous times in the 1950s.
This is a very human Lugosi, a character almost completely without his trademark charisma and charm, becoming as a result, a more pitiable and pathetic figure. The one armed, white haired Anton, is a far cry from the suave and mad Dr. Vollin, that the actor portrayed for that year's The Raven, but it's a performance that underlines that Lugosi was an actor and not just a personality.
Like Ygor from Son of Frankenstein(1939), this displays Lugosi's penchant for character parts and the ability to adapt, which Hollywood seldom recognized and is still the reason why he is an underrated actor to this day. Lugosi's bit where he tries to explain to the bartender/friend who does not recognize him, his torturous journey and his remorse over murdering a sailor, are among the best acting that Lugosi has ever delivered, just too bad so few have seen it.
The rest of the cast are merely decent, though few affect American accents very well, considering this was supposed to be an American vessel. Shirley Grey makes for a likable heroine, and something of an audience identification character, which makes her last reel demise all the more strange and curious. Why not show it or at least, explain it? A half-assed  attempt is made, though clearly in post-production, when a line is dubbed towards the conclusion(with some poor English actor doing a poor Lugosi impression) about her and the Captain's demise, but it feels halfhearted.
Phantom Ship is a strange film, really. It has both good and mediocre direction. There's a great bit towards the end when a happy accordion playing sailor is playing away, but is told to stop. Another sailor tells him to go on and he does. A fade out and the accordion lie broken on the floor of the cabin and the sailor who played it, is missing. This is very well done and is far more sinister a shot of an accordion, than the uproarious, overly symbolic burning death of the annoying instrument in Night Passage(1957), where Jimmy Stewart's character had been emasculated as a result of the terrible instrument.
Poor directorial choices are less the fault of camera setup, than poor editing, which can be confusing. It's difficult to keep track of characters, for one thing and despite the cast, little is done to engender much sympathy for most of the cast. When sailors begin to get picked off, we feel little. If this had been built up better and we learned more about the men, the outcome could have been great. Take the conclusion of Val Lewton's The Ghost Ship(1943). While a mediocre film, at least by Lewton standards, the conclusion achieves great tension, particularly because of the sharp editing and keen character development. It's something that Phantom Ship lacks, and that's unfortunate, because this had the makings of a very good thriller. 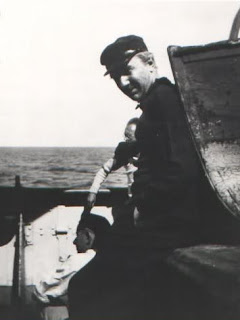 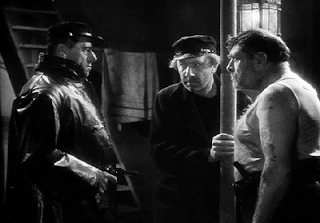 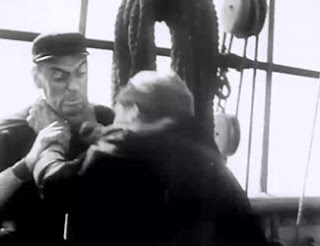 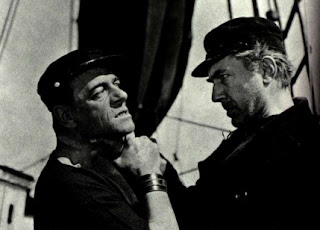 Phantom Ship may be no great film, but it is briskly paced and contains some genuine shocks(including some bizarre profanity and racial slurs that wouldn't have flown even in the 30s) and a great performance from Bela Lugosi.  The film lacks much of the blood and thunder that Hammer Studios would be later famous for, but it's a decent budget diversion and deserves a wider audience. The combination of Lugosi, Hammer and the mystery of the tale presented, should be enough to warrant it's inclusion as an essential of 30s mystery cinema. 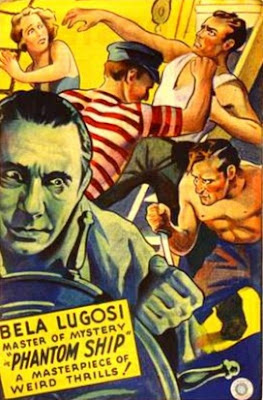 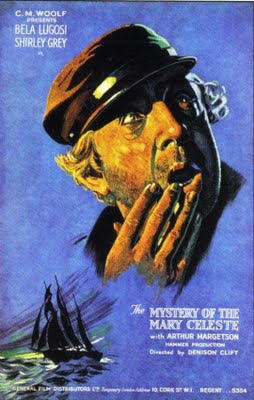 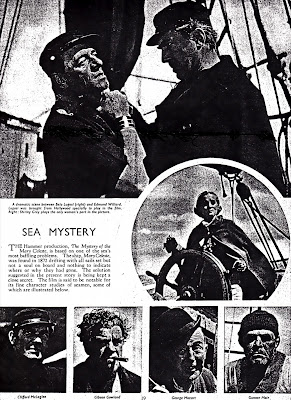 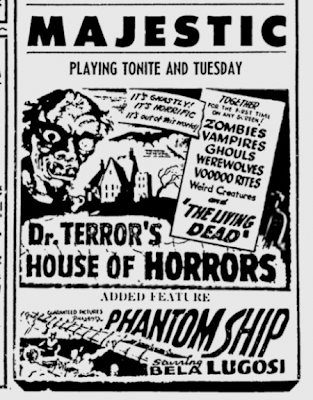 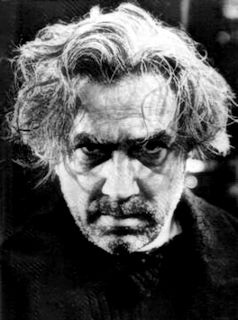 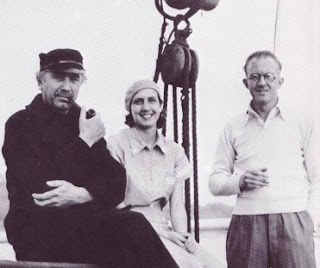 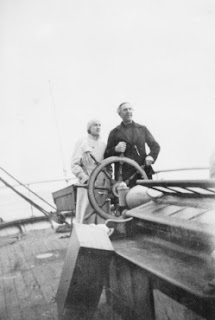 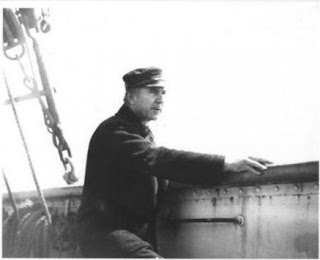 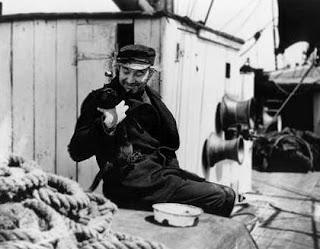 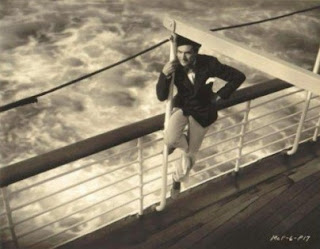 * I borrowed a few pictures from this wonderful website and hope it's okay! Here is a link for anyone interested in more about the production and history of this film: http://beladraculalugosi.wordpress.com/mystery-of-the-mary-celeste/