In 1946 This Man Killed Five People... Today He Still Lurks The Streets Of Texarkana, Ark. 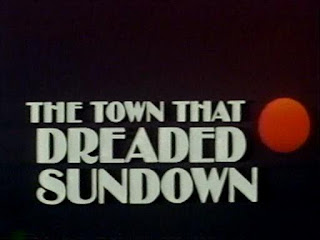 Based off a true story and inspiring countless slasher and mad killer movies, The Town That Dreaded Sundown was destined to become a cult favorite among the drive-in crowd. While most people may not recall the film, the title and the creepy hooded killer of the film are indelible. In fact, while it took me some years to eventually get around to viewing this minor gem from the 70s, the poster art, which was also used for the video release, stuck in my young mind and was instantly ingrained in my memory as one of the scariest and most foreboding. 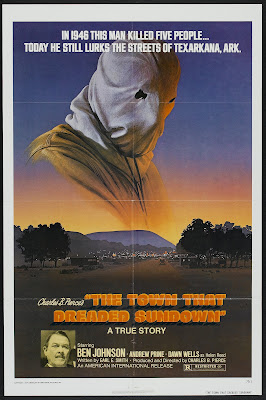 The film is set in 1946, shortly after the close of the Second World War and is told in documentary style. At first, this appears corny, but the gimmick works and film's style makes it all the more creepy. The town depicted, appears like any small American town from that period and it's a credit to the filmmakers that they are able to make it look as 40s authentic as they do. For some unknown reason, in a genre-drenched cliche moment, at least by today's standards, a mad killer attacks a couple in a car on a dark night. He wears a sack on his head, looking like Jason from Friday the 13th Part 2(1981) or some lost Klan member. After another couple is murdered, the local police call in a renegade detective(Ben Johnson) and he is determined to catch the fiend.
From here on in, the film melds it's documentary technique with an odd mixture of decent drama(thanks to Johnson and Andrew Prine, who has a fine turn as the Deputy on the case), very broad humor and grindhouse, exploitation elements, such as a sadistic, silly moment, where the killer uses a trombone with a knife attached to it, to menace a girl he has tied to a tree. It's as ridiculous as it sounds. 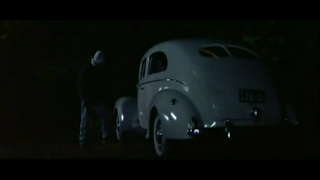 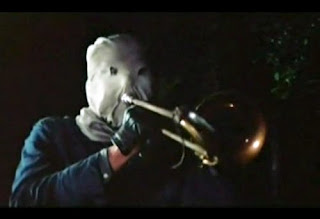 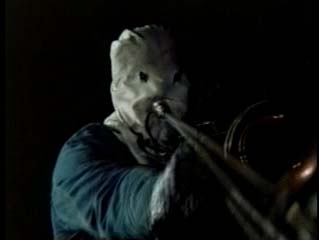 After a tense scene where the killer stalks Mary Anne from Gilligan's Island(Dawn Wells), utilizing a silenced revolver in the process(which he shoots in her cheek!), the hunt heats up, with a lead finally appearing, which sends Johnson and Prine after the killer. They shoot at him and are able to wound him with shotguns, but he disappears, and we are left uncertain as of his demise. The film ends with the disturbing idea that he may walk among us, a thought reminiscent of an old campfire tale, as that was probably the intention. 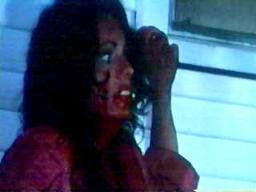 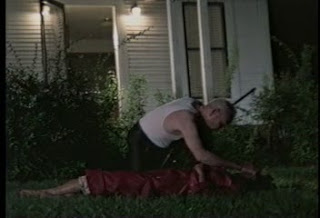 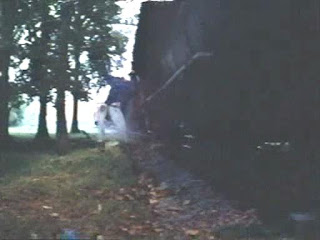 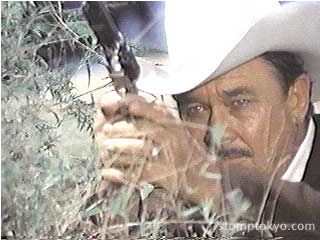 The Town That Dreaded Sundown is an entertaining b-movie with some very tense and frightening moments, courtesy of some decent atmosphere and a genuinely frightening killer. Some of the elements present in this film, clearly inspired the next decade's blood-drenched splatter films of the slasher genre, though few had as much class as this one. Though, I may be wrong on a few points.
Some scenes are just silly and hurt the mood. The trombone scene is sort-of-creepy, but can be also seen as funny, if a tad disturbing. It was an odd choice, though i'm not certain that it didn't happen!
The worst offense is the comic relief. While, such a dark subject could benefit from a dose of comedy, it has to be handled with subtlety in order to maintain a level of suspense throughout, such as what Hitchcock did in his best thrillers. This director did not do his homework and instead opts for broadly comic sequences, such as policemen dressing in drag in order to catch the killer, a scene that comes across as nonsensical. There's no policewomen to use? I understand the time period, but this is a stretch. Or how about the comic car crash, clearly derivative of the "good-ol' boy" films popular at the time, complete with banjo on the soundtrack? That was a bit much, too.
Luckily, it's fairly well-acted, bolstered by two good lead performances, and the scenes with the killer are largely scary and well done. If anything, this is a decent and enjoyable thriller with enough thrills to recommend it. Slasher fans should take note, as this is an important evolutionary link in that popular(if not much maligned) subgenre. 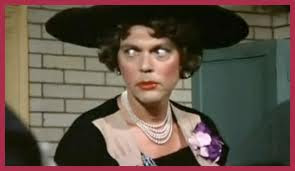 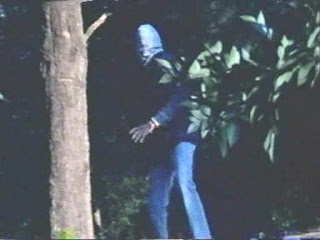 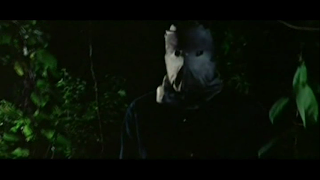 * I borrowed a picture of Ben Johnson with a Peacemaker from Stomptokyo.com. I hope you fellows don't mind.
Posted by Batcat31 at 10:21 PM