The Screen's Classic Of Terror! 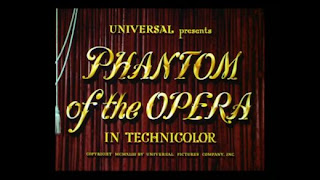 Arthur Lubin's acclaimed, yet controversial, remake of the silent Lon Chaney classic is one of the most mixed bags of the classic horror era. It's a lovely looking film, winning two Oscars for it's art direction and cinematography, but horror fans often come off disappointed. For one thing, most of the horror and pathos of both the original film and the novel are eschewed for lighter entertainment and less emphasis on terror and suspense. This version was the most well know for decades, as the earlier adaption was not widely available, and to this day, most people think of this film when regarding the plot. It's this adaption that introduced the "acid in the face" explanation, along with the most iconic of the Phantom's masks.
Universal Studios had wanted to remake this film for several years and had planned one during the Laemmle regime, and was to star Boris Karloff. Unfortunately, this never happened, but other adaptions were planned, including one with Charles Laughton, as well as the most absurd concept, that being a pairing with Abbott and Costello! Finally, the current version was passed and presented as a "prestige" production with a major actor in the lead. Claude Rains was cast as Eric Claudin, the Phantom of the Opera, but just to show where this production was leaning, he was billed third(!) below Susanna Foster and Nelson Eddy! 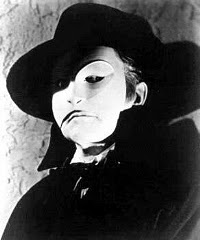 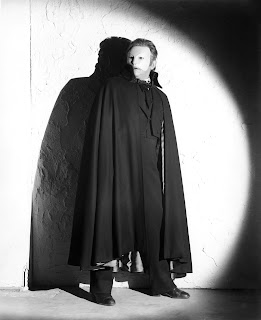 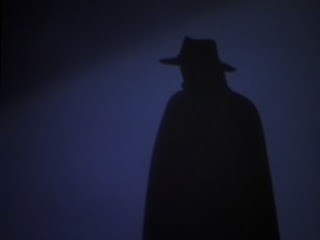 The plot involves a violinist(Claude Rains) who has developed arthritis in his fingers and is relieved of his position in the orchestra of the Paris Opera. The Opera believes that he will be well off, but he has secretly been paying for lessons for a young woman, Christine(Susanna Foster), whom he secretly admires. Hoping to keep up with the bills and her tuition, he decides to sell a concerto he made. However, a misunderstanding occurs and believing himself robbed, he strangles the printer whom he delivered his piece to, and the printer's bitch girlfriend, tosses acid in his face! 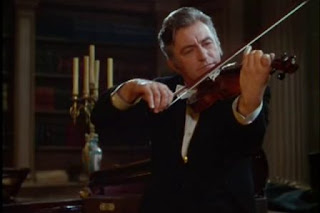 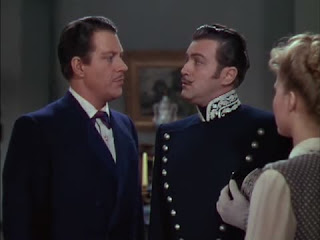 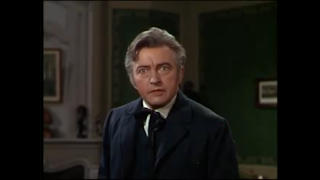 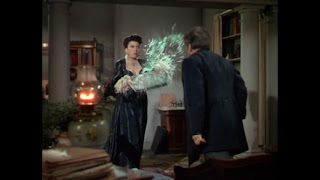 This leads Rains to hide in the sewers and become...the Phantom! Soon, all manner of mischief is being unleashed on the Opera, as capes and masks go missing and a skeleton key that unlocks the over 2000 rooms, is lifted as well. People speak of an "Opera Ghost", though i'm not sure how such a reputation was created in such a short span of time. Most of the film we are following Christine and her dull suitors(Nelson Eddy and Edgar Barrier) and endless musical numbers, which even ardent fans of opera are likely to dismiss. The Phantom is largely kept in the shadows, though he does manage to strangle a maid and a rival singer of Christine's, hoping to advance her career.
The climax depicts two elements that were in the mid-section of the Chaney film: the falling chandelier and the unmasking. The former is actually handled better with greater editing and suspense, though without the wonderful dialogue(er, I mean title cards) of the previous film, where Erik intones, "Behold! She's singing to bring down the chandelier!"
The chandelier crashes and in the confusion, Christine is taken captive by Eric back to his lair, believing him to be a policeman(why on earth would the cops wear the same masks as the ones that were stolen and used by the Phantom?) and now she is prisoner in his lair, which leads to the inevitable unmasking, which can't hold a candle to the 1925 version. Part of the problem, was that the studio were hesitant about a gruesome makeup, so Rains only appears half burned and sort-of resembles Two Face from Batman. The suitors arrives and one of them fires a shot, which causes the Phantom's lair to come crashing down on him. In the end, Christine is an opera star, the Phantom is dead and the suitors go out to lunch. 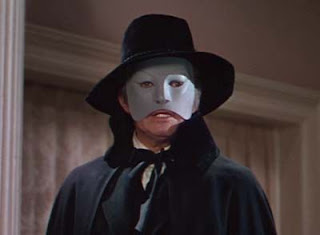 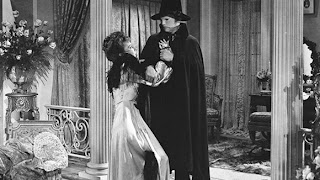 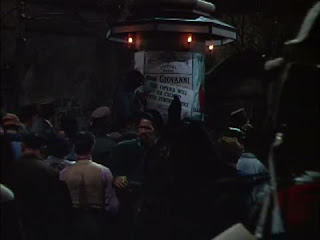 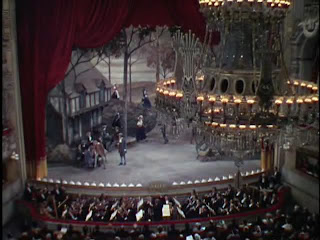 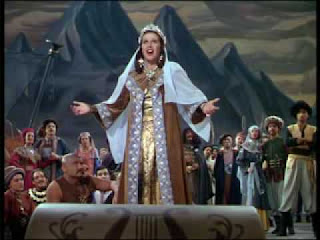 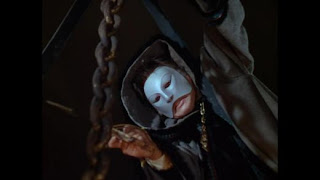 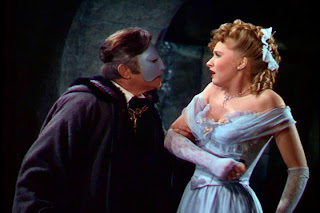 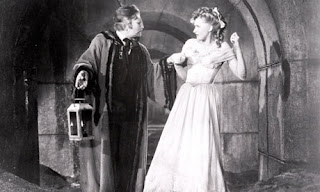 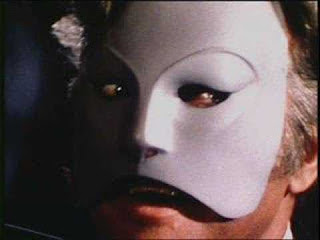 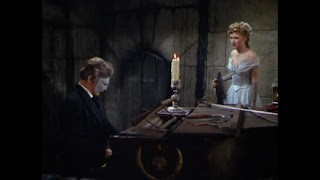 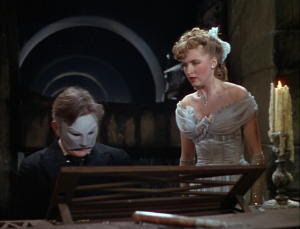 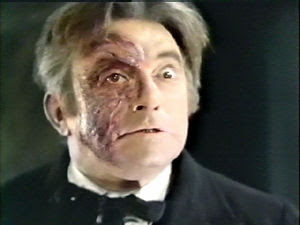 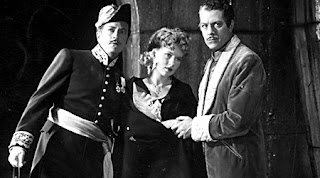 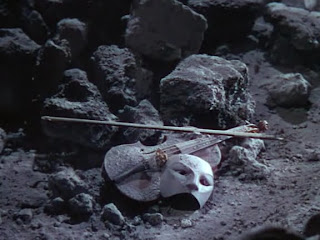 The Phantom of the Opera is not a great film, but it has the makings of one. The film is lavishly presented and looks marvelous, especially with it's vast sets and beautiful color photography, some of the best of the period and well-deserving of an Oscar nod. However, it's a very imbalanced film and has none of the poignancy or sense of adventure that made the original so timeless. Part of the problem was the emphasis on the opera, which is given prominence here, and none too well. The main characters are just not that sympathetic, nor that terribly interesting and do little to advance the plot. Now, this is not the say that the ones in the previous film were superior, but that film was wise in keeping the Phantom as the primary focus, as it is his film after all!
Rains is excellent as the Phantom, bringing a tortured pathos to the part as the love struck Eric, but the script serves him poorly. Little is revealed on how he went so completely mad, nor is much revealed about his past. You would think that a distinguished musician who had worked in the Opera for over 20 years would earn more empathy and respect? It's also unfortunate that the subplot revealing him to be Christine's father was dropped, because the current romantic angle does not work quite as well.
Confusingly, this version has become, probably because of the name alone, a staple of the Universal Monsters Collections, appearing on both VHS and DVD as the representative of the Opera Ghost, even though all merchandise depicts Chaney's vision. It's curious to note, that Universal has never released a single version of their 1925 adaption, not even as a bonus feature on the DVD of this film.
I saw this when I was very young, probably before Chaney's version, renting it from a local video store and taping it. I enjoyed it and found it entertaining, but was forever changed once I acquired the Chaney version on VHS at age six. Since then, I've seen most of the various adaptions of this story, which happens to be one of my all-time favorite novels. The Hammer adaption was probably the third best, incorporating elements from this film, as most were to do. I have yet to see any that have captured Gaston Leroux's original text, with only Chaney's interpretation bearing the influence.
The 1943 film is far from being great, but is still decent entertainment and required viewing for the horror fan, for Rains' perfromance, alone. Note: This adaption was also filmed on Stage 28, the same as the 1925 film. 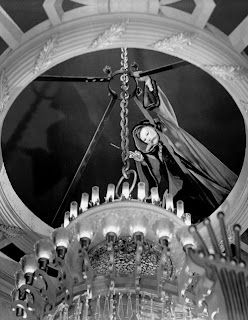 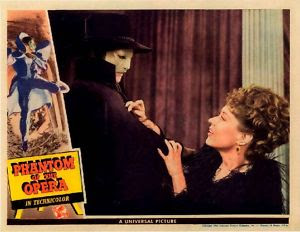 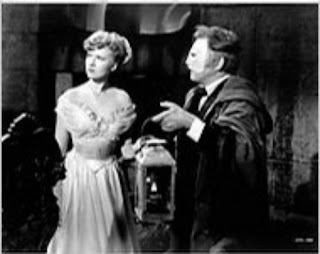 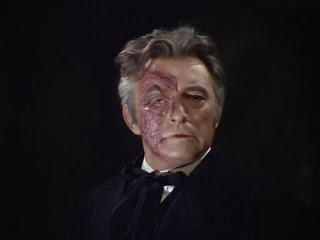 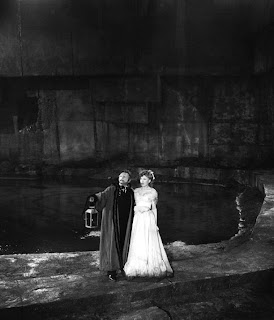 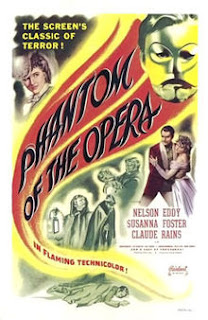