Zombies Are A Boy's Best Friend 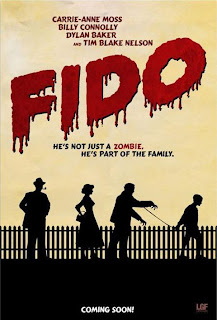 Zombie movies have been undergoing something of a cultural renaissance in the last decade, as this brand of apocalyptic escapism, spawned by George Romero in Night of the Living Dead(1968), has infiltrated every form of popular culture from zombie survival guides to popular video games, tv shows and of course, movies. Most people regard Shaun of the Dead(2004) as the best zombie film of the last decade. That film was a wicked send-up of the Romero universe, that managed to combine good characters and gruesome set pieces to create one of the most satisfying genre films made in the last ten years. However, the most complex and often neglected of the zombie pictures is another independent zombie picture entitled, Fido(2006).
I meant to see this film years ago, but lost track of it, until recently when it appeared on a DVD set that I had acquired. I honestly had no clue what to expect, not certain if it was going to be a broad comedy or something really gruesome, so I had some trepidation upon my initial viewing. All I can say is that it was a truly rewarding film experience and it made me question why did I hold off so long on this one? 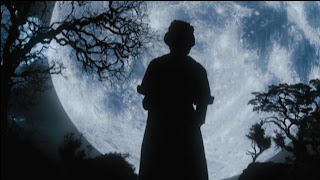 The film begins with a hilarious parody of 1950s cold war propaganda films, detailing a zombie outbreak and how mankind overcame it and developed a company called, "Zomcom" which has managed to create collars that domesticate the living dead.
The main plot seems to have been inspired by the "Bub" character from George Romero's Day of the Dead(1985), which had a wonderful subplot(the best part of that movie) that dealt with a smart, domesticated zombie. I always felt that could have been it's own movie and I feel that the director must have felt the same way. The film plays like a 50s sitcom crossed with Lassie, E.T. and of course, the Living Dead films.
Timmy(Kesun Loder) is an outsider in school, which has the appearance of a normal 50s American school, except the kids have rifle practice and visits from Zomcom.
Timmy's family has just gotten a zombie(Billy Connolly), so they can fit in with the rest of the families on their block, something that the father(Bill Robinson) is wary of, since he has a phobia of the living dead. The mother(Carrie-Anne Moss, looking much better here than she did in The Matrix) wants to fit in with the rest of the neighborhood, especially since the next door neighbor is the head of Zomcom(Henry Czerny).
Despite the lovely, almost utopian environment that director Currie has imagined, the neighborhood has an undercurrent of depression as the story reflects many of today's sociological concerns, stemming from the dissolution of the nuclear family and dehumanization. It's a very existentional picture dealing with the theme of what it means to be alive, as Timmy asks the Zomcom official in the beginning, "are they really dead?" 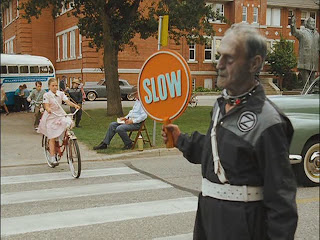 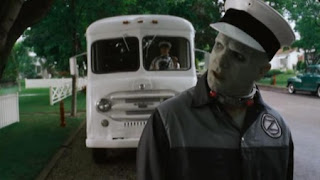 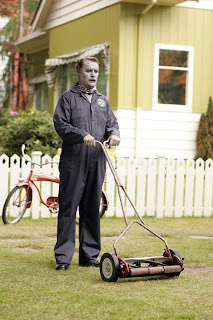 The zombies in the neighborhood are used invariably as slave labor, ranging from delivering mail to mowing lawns. One man, Mr. Theopolis(Tim Blake Nelson) even keeps his own pretty zombie(Sonja Bennet) as his mistress. Clearly there is a disturbing undercurrent to the picture, underneath the rose colored exterior, maybe a reflection of the times itself, as many issues are presented throughout that also tap into the issues of the next decade, such as civil rights and female liberation.
At it's core, though, Fido is a story about friendship and what it is to be human. Timmy finds a friend in Fido, which he dubs his zombie, and the zombie becomes over time, like a father figure, even though he does occasionly bite people and cause minor zombie outbreaks. The turning point in the story is when Fido's collar goes off and the zombie chooses not to bite Timmy, instead going for help, in a clever parody of Lassie.
Since the father is always golfing and generally neglecting his family(though he does show a morbid fascination with burial services, as he happily exclaims that the entire family will have their own plots!) this leads the wife to seek solace with Fido, as well.
Meanwhile, Mr. Bottoms, the head of Zomcom, is looking for some of the neighborhood missing and this leads to Fido being locked away. Timmy is heartbroken and vows to get his friend back. With the help of Mr. Theopolis, he is able to get to Zomcom and find Fido, though he is briefly captured by Mr. Bottoms, who turns out to be insane, and Timmy's father is shot and killed, while Mr. Bottoms becomes zombie chow.
However, all is well at the end, as Fido lives with the family, acting as father and husband to his family and Mr. Bottoms is now a domesticated zombie, that apparently has proven better for his family as well. 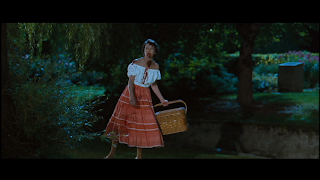 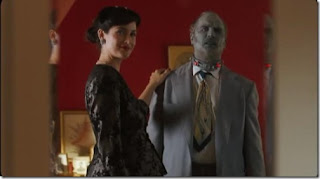 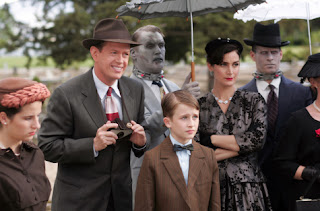 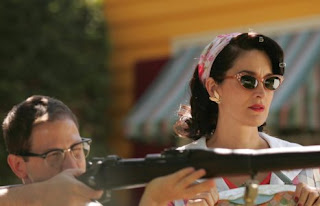 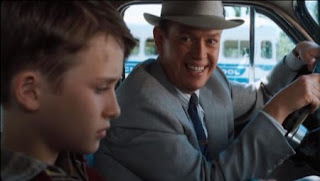 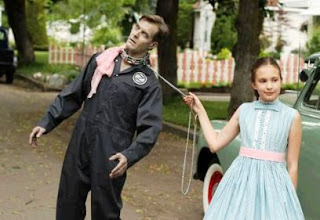 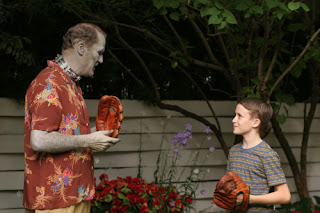 Fido is a deceptively complex film that manages to meld genuine warmth with a subtle use of comedy and horror. The film's commentary on the middle class in America seems to get what the Romero films have been hinting at for long: the zombies are reflections of us and questions how close we are to living automatons, ourselves.
Andrew Currie's direction is brilliant, with a wonderful sense for period, from the World War Two-like newsreels of the zombie war(which could make for a fun movie) to the picturesque backdrop of small town suburbs that appear so cozy and warm, despite the occasional zombie bloodbath. The script works just fine, able to transverse that fine line between pathos and humor. What's really amazing is how likeable this film really is, without being corny.
Billy Connolly deserves so much credit for his excellent portrayal of Fido, making him both sympathetic and human and doing it all without the aid of dialogue. He is just perfect in the lead role, adding subtle nuances to the character, reflecting on past remembrances(like a comical joy of smoking) that really makes him appear alive.
Young Kesun Loder is a real surprise here, appearing as likeable a young performer as i've ever seen, really pulling in the audience to his plight. Usually in such films, the young leads make and break the picture, and i'm happy to say that Loder certainly makes this work. The kid is so real and relatable, capturing the innocence of the era and youth itself. It's a shame that this rather mild film got an R-rating, when it should have been given a PG-13 instead. I could have easily imagined seeing this as a kid and relating to Loder's character and certainly entertaining the notion of a zombie pet!
Carrie-Anne Moss and Dylan Baker are fine as the parents and both grow through much growth in the picture. Moss' character portrays the pretty 50s housewife to the hilt, while also hinting at the emerging feminism of the next decade. She proves that she can do more than silly action pictures. Baker has a difficult role, as he is mostly seen as paranoid and childish, unable to get over a childhood trauma of shooting his own father in the zombie war. Baker makes us realize that his character isn't so much a bad man, as a very flawed one that clearly means well, but has a difficult time overcoming his own prejudice.
The subplot involving Tim Blake Nelson and his zombie girlfriend is a little disturbing, but the portrayal of it is strangely affecting and is handled with enough taste to work enough. Besides, I thought he was a hoot, especially the way he talks to his zombie, reprimanding her everytime she growls("no teeth!")
There's no question that Fido is an acquired taste, as it has so much weird stuff jammed into the plot and those seeking a gorefest will most likely be disapointed, but for those who can open their mind to the story, than this can be a very rewarding experience. It's unique and highly enjoyable, clearly showing how expansive the universe of the zombie apocalypse really is, while being more complex than 90% of the films that pass themselves off as more serious studies of the theme. For zombie fans, this is a must-own movie, though I wouldn't limit it to that one demographic, as it's one of the finest horror films of the last decade and one of the most clever genre films to emerge in years. 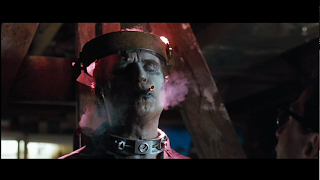 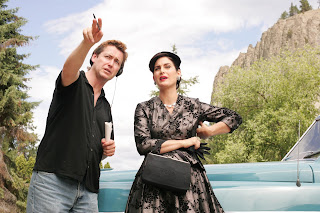 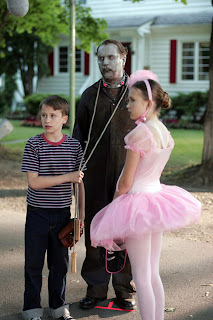 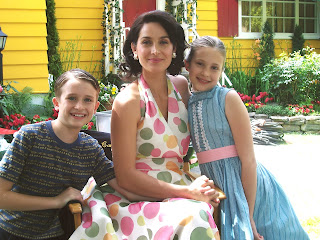 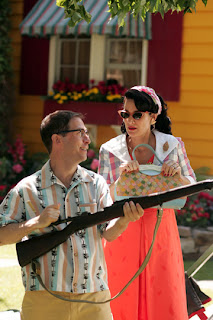 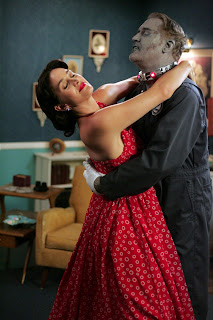