Stop On By And Give Afterlife A Try. 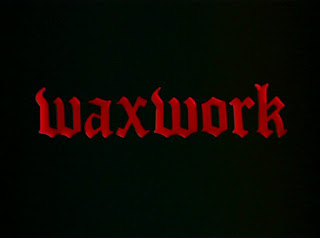 Scream(1996) is often credited as being the first horror film to poke fun at the genre, but in-jokes and satire had always been part of the horror film dating back to the films of James Whale. Throughout the 1980s, there were several films that managed to pay homage to terror from the past, from big titles like Fright Night(1985) to Night of the Creeps(1985) and the cult classic, The Monster Squad(1987). 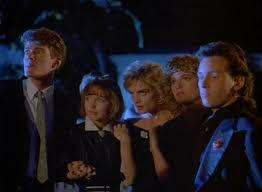 Following in this tradition was Waxworks, from first-time director, Anthony Hickcox, who was the son of Douglas Hickcox, who made the classic, Theatre of Blood(1973) with Vincent Price. This film felt like an attempt to follow in his father's footsteps, while also paying homage to so much great horror of the past. The premise was ripe for potential and many of the ingredients were there, but Waxwork just manages to miss the mark. It's entertaining, and has cult classic written all over it, but went wrong? 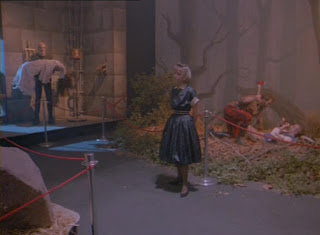 The film begins with a man being brutally murdered by some thugs, set to swing music. It's a bizarre opening for sure, setting up the disjointedness and manic quality of Hickcox's screenplay. We are then introduced to some yuppie college students, including Gremlin's Zack Galligan as Mark, and April Fool Day's Deborah Foreman as Sarah. They and a few of their friends are invited to a wax museum by curator, David Warner, who is perfectly cast, able to blend a melding of menace and sarcasm.
The Waxwork is populated by 18 displays depicting several of the most horror characters, including Dracula, Frankenstein, The Mummy, The Werewolf, The Phantom of the Opera etc. One by one, each kid ends up being drawn into the exhibits, which in turn, bring them into an alternate dimension, where they encounter the monsters for real.
This starts with a violent werewolf scene(which includes a cameo by John Rhys-Davies as the werewolf!) and some incredibly gory set-pieces, that include a man being torn in half and two werewolves being blasted by silver bullets.
The next one involves Zach Galligan's bitchy love interest, China(Michelle Johnson) ending up in Dracula's castle, where she feasts on blood soup and is terrorized by various vampires in a brightly lit torture room, where a man is tied to a table, his one leg flayed to the bone. This is the scene that probably got the film threatened with an "X" as it contains some extremely graphic violence including a head explosion by crucifix(!), impalement by wine bottle(!) and various other means of vampiric execution, before the young woman falls prey to the Count(Miles O' Keefe, who is as terrible as he was as Tarzan). 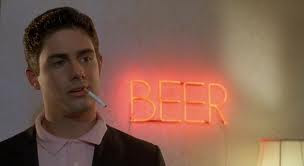 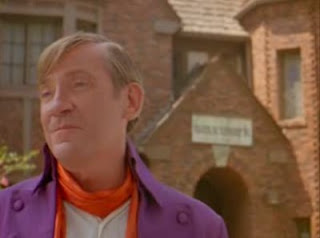 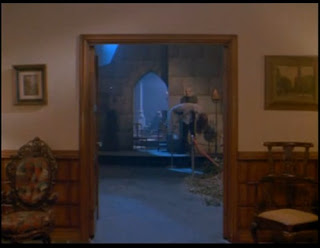 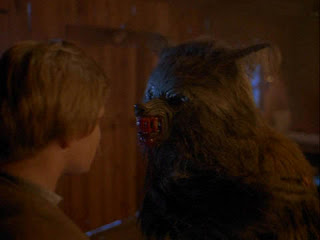 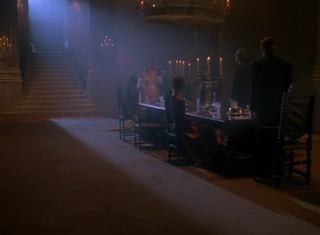 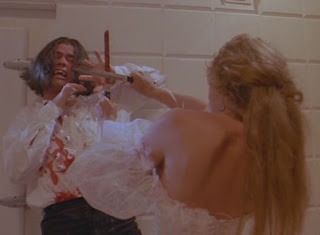 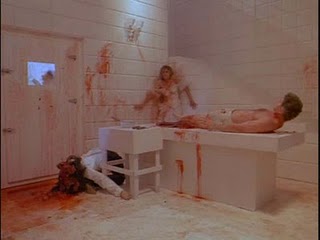 The remaining two kids, Mark and Sarah , leave the Waxwork, being told that their friends had left. Meanwhile, a guy who was supposed to go on a date with China, goes looking for her in the Waxwork and gazes at the Phantom of the Opera display, where he informs David Warner that this was made into several movies, before being sucked into it's world. David Warner muses, "they will make a movie out of anything."
Getting worried about the missing kids, Mark and Sarah report them missing, but no evidence can be found at the waxwork. The detective on the case does return later, though, and is sucked into the world of the Mummy, where he ends up meeting his death. This sequence is particularly effective as the Mummy is brought back to his terrifying origin, and fans will get a kick out of the use of Swan Lake on the soundtrack, an obvious nod to the 1932 original.
In the meantime, Mark realizes that his grandfather was a major collector of monster and horror artifacts, and that David Warner's character had not just stolen them, but was responsible for his death. Sarah finds herself drawn to the Marquis De Sade, an interesting plot twist, suggesting her character's suppressed emotions and anxieties.
Mark and Sarah are able to track down an old friend of Mark's grandfather, Sir Winifred(Patrick Macnee) who reveals that if all 18 exhibits recieve a victim, they will come to life!
Mark and Sarah decide to burn the waxwork, but Sarah is drawn into the realm of the Marquis De Sade, who is presented as the true sadist and monster he really was. Mark finds himself in a black and white graveyard, straight out of Night of the Living Dead(1968). Escaping from it, he discovers it all to be an illusion and is able to rescue her.
However, as they exit from the waxwork world, and into reality, they find that are too late and that Warner has brought all the characters to life!
Luckily, Winifred and his band of monster hunters arrive to kick monster butt, in a delightful battle royale that includes sword fighting and a few comical deaths, like Zach Galligan blasting away a girl who was a victim of De Sade asking for a taste of the whip(not a fan of the kinky stuff, I guess) and for no reason, a guy grabbing Dracula's bat and telling it to, "make my day" before blowing it's head off with a Colt Python.
Mark duels with the Marquis De Sade and the Marquis eventually bites it from behin, as Sarah tosses a hatchet into his back. David Warner is shot by Patrick Macnee, who proceeds to fall into a vat of wax, before popping out and asking Mark, "Do you want a closer look?" a recurring gag from the film. Everything burns down and the young couple escape, though a severed zombie hand does appear to escape, leaving room for a sequel. And in a final bizarre note, the end credits are set to the song, "It's My Party" for no reason at all. 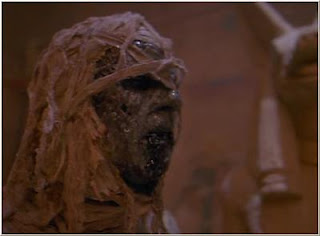 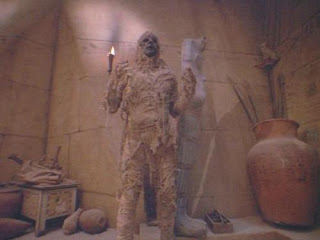 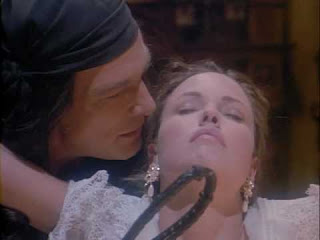 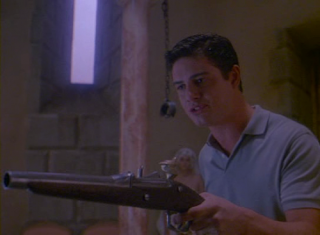 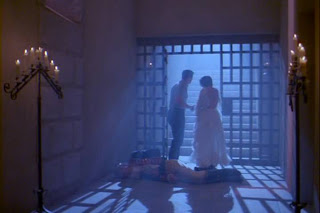 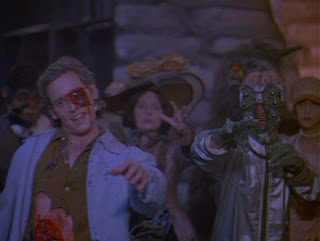 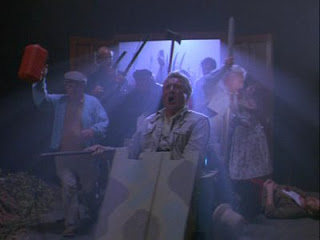 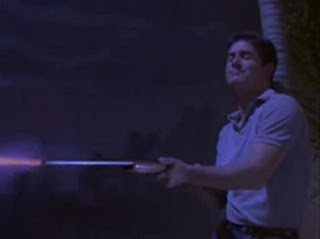 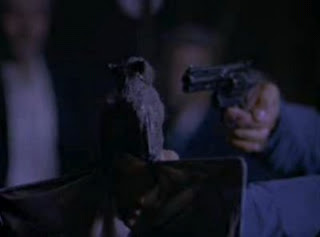 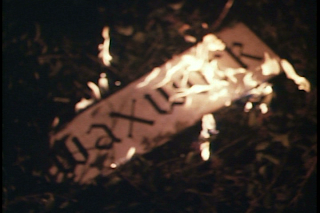 Waxwork is a film that survives largely on a truly original and rich plot that could probably supply fodder for a dozen movies. The problem is that while Hickcox's script is ambitious, it leaves glaring plot holes, and worse, little time for character development that is so crucial to making something like this work. The premise about a collector who has obtained real artifacts from actual horror stories is good, and one wishes that more time was spent on some of these waxworks, particularly the more exotic ones like that strange insect alien, and for a change, the Golem, who rarely arrives to these monster parties. The monsters all look pretty neat, too, evoking imagery from both contemporary and classic depictions of these infamous baddies. The waxwork time dimensions are mostly clever, though one wishes they were explored further.
The biggest problem, though, lies with the backstory. Sir Winifred and his party of monster hunters, are just introduced too late for any dramatic effect. Included among them are Zach Galligan's butler, who has had only one brief scene in the beginning, so the shock that was intended to see this quiet, unassuming character is lost on the audience. Likewise, very little is brought up about the kids and their interests, including what they are majoring in college. It would have been interesting to give Galligan's character some link to his grandfather, perhaps some mutual interest, but is never brought up.
In all fairness, the acting is largely good, and the film works on the level that Foreman and Galligan are such likeable performers, as are Warner and Macnee, whose veteran status was sorely needed for this production.
The film also earns points, not just for the quantity of classic monsters, but also the oddball choice of having the Marquis De Sade as a main villain, even though not nearly enough is done with this character and his relation to the protagonists. It's understandable why this has a cult following, but so much could have been improved upon, it would be nice to see it redone, even though the prospect in today's cinematic environment could prove disastrous. 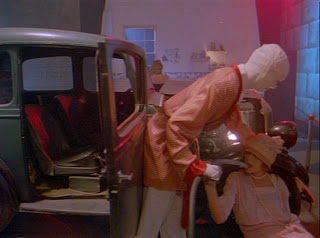 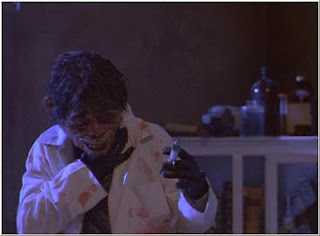 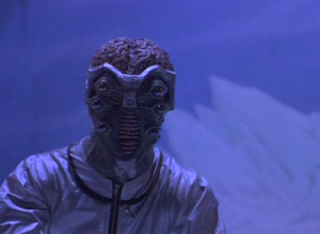 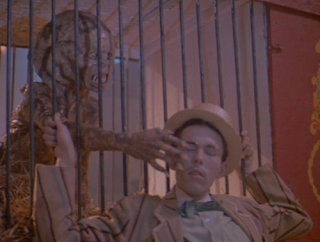 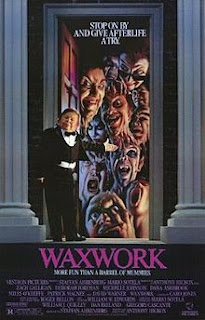 This was followed by a sequel, Waxwork 2: Lost in Time(1990) that was also fun, this time depicting the same characters jumping through various dimensions, where they encounter Frankenstein, Godzilla, Nosferatu and various other characters. This one is a hoot for genre fans, as there are even more references and nods to the classics, but the second half's turn into a swashbuckler has no cohesion and the recasting of Foreman's character, with an actress with little of the charm( as well as no physical resemblance) was a bad idea. Still, both are enjoyable and campy excursions for the b-movie fan and worth a look.