The Holiday Picture Of All Time! Charles Dickens' Joyous Classic! 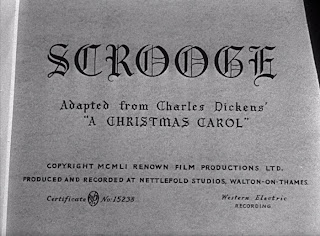 Every family has there own Christmas traditions and being raised as a film fanatic, certainly there are several cinematic neccesities during the season. Besides the holiday perennials of It's a Wonderful Life(1947), A Christmas Story(1983) and the various animated films, i've always held the tradition of watching as many versions of Charles Dicken's classic story, A Christmas Carol, as possible. And it just wouldn't be Christmas if that didn't include at least one viewing of the definitive version from 1951, starring Alistair Sim as the immortal miser. 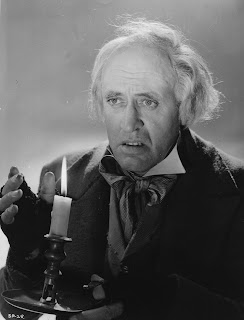 Rather than offering my usual plot synopsis, i'd rather reflect on what makes this version so different. Earlier adaptions of the story, notably the 1935 and 1938 versions, focused on just simply telling the story very plainly, depicting Scrooge as something of a cariacture. It was difficult to find any real insight into his character and save for the performance of the lead actor that would perform in the role, it was decidely one note. Sadly, most adaptions take this simpler route and rarely explore the character. What makes the 1951 version so special is that it chooses to do just that, while boldly expanding Dicken's text. Uusally such liberties can be atrocious when handled by filmmakers, but the sensitivity afforded here actually improves on the characters and makes for a larger impact.
Alistair Sim's Scrooge is definitive because he is not just a greedy miser, but a lonely, hurt man who is forced to hide his emotions as means of defense against a cruel world. Sim's character is at once cold and calculating early on, but there are definite shades of pain as he is reminded of his past, however subtly, by his nephew(Brian Worth), whom he tells off with his trademark, 'humbug!"
His cool disattachment during the scene with the moneylenders is genuinely eerie and coupled with the opening bit on the steps of the loan house, where Scrooge encounters one of his lenders, really sets the stage like no other Scrooge before or since. 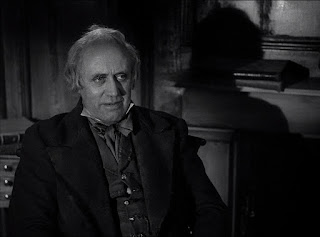 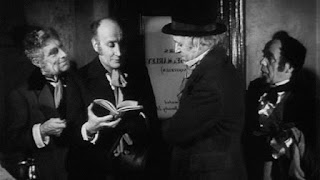 At it's heart, A Christmas Carol is still a ghost story, so the supernatural and horror elements are utilized to the hilt. Beyond the peaceful atmosphere represented by yuletide celebration, evidenced by Bob Cratchit's merry nature or Tiny Tim staring in at all the wonders of an old toy shop, there's a brooding menace that lurks around the corners, which manifest themselves as soon as Scrooge goes home and encounters Marley's ghost(Michael Holdern) on the doorknocker. Hurst builds this first meeting up quite suspensefully, with quick cutting and a great use of sound, as Scrooge believes he hears bells ringing, signalling the arrival of the spirit.
Holdern is a brilliant Jacob Marley, and as all enthusiasts of this story know, a good Marley ensures a good story. His portrayal of Marley, verges between the subtle and the violent, as his wails of pain and anguish are both terrifying and heartbreaking. He may be the most frightening version of this famous specter on film, only Frank Finlay's performance in the 1984 production, coming as close.
This adaption also includes the disturbing bit where Scrooge looks out of his window and witnesses the wandering spirits, which Marley is one of and despite advances in technology, I believe this is the creepiest on film. 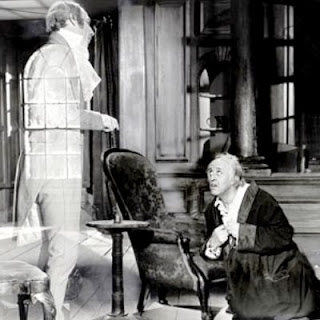 The largest departure in this version is however in the depiction of Scrooge's past. Where most other adaptions neatly skim over his life, focusing only on his early apprenticeship and failed engagement, this version shows many more sides of his character. We learn that Scrooge was a lonely outcast from childhood, only comforted by his sister, Fan(Carol Marsh) who died giving birth to his nephew, which Scrooge never forgives his nephew for, even though Scrooge's own mother died the very same way, giving him life. This is not in the book, but it adds immeasurably to the understanding of the character and makes his past that much more bitter and even creates a method to his madness.
Scrooge witnesses his engagement to Alice(Rona Anderson) while he was still young and idealistic and it pains him greatly. He is forever changed after his sister's death, which is not just the turning point for the young Scrooge, but the old as well, as he is forced to witness his sister asking for Scrooge to take care of her boy with her dying breath, forcing him to break down as he did not follow her promise.It's a great moment and possibly the most emotional in the entire picture. 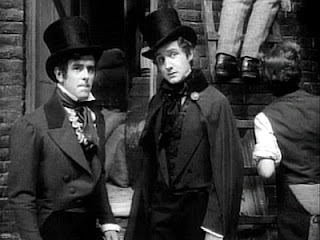 Scrooge becomes a harder man and is corrupted and influenced by Mr. Jorkin(Jack Warner) who essentially plays Mephistopoles to Scrooge's Faust. Eventually, Scrooge's company buys out his old employer, Fezziwigs, company and Scrooge breaks up with Alice. He also meets a young Jacob Marley("I'm sure you two will get on famously"), who is portrayed by a young Patrick Macnee, years before The Avengers.
Mr. Jorkin turns out to be an embezzler of his company's capital, and this leads to Scrooge and Marley buying up shares and becoming the company, leading to future infamy.
The final bit shows one of the only times on film that we actually witness Marley's death. Filmed with an obvious expressionistic influence, complete with Ernest Thesiger as the undertaker(!), this scene is both chilling and moving. Marley, possibly foresseing his own fate, attempts to warn Scrooge of his own, while on his deathbed, but expires before he can get his point across. It's a credit to Sim for allowing sympathy slip into his character, even then, as he attempts to encourage his old friend. None of these scenes are in the book, but they all feel as if they should have been. 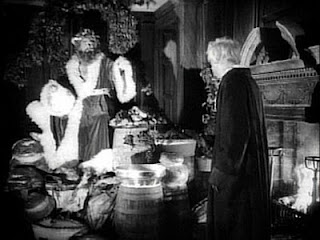 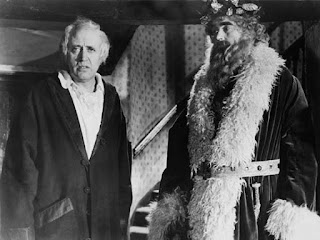 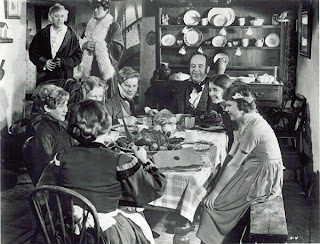 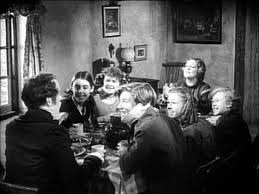 The Ghost of Christmas Present(Franics De Wolff) is just right, with his imposing presence and booming voice. This segment is less gutwrenching than the visions of the past, but still fairly heartbreaking. Witness Sim's reaction at his "toast" at the Cratchit household or the sharp pain he registers at the prophecy of Tiny Tim's death. This is great acting and the atmosphere and world created within make it all come to life so beautifully. It's also a pleasant touch that in this version, Alice does not marry, but works for the poor and needy, literally the opposite of Scrooge. This suggests that unlike other versions, there may be hope in the future for Scrooge yet.
Of course, the best moment in this interlude is the most macabre, as the Ghost reveals the children of Ignorance and Want. Most adaptions delete this moment, but I don't know why. It's one of the best moments in the original story and is still relevant today.
That line, "Beware them both, but most of all, beware this boy!", still sends shivers down my spine, I confess. 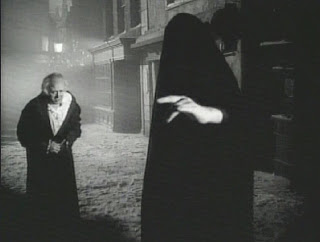 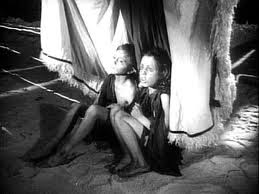 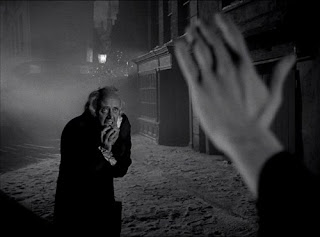 The Ghost of Christmas Future is genuinely frightening, yet simply presented. He is a literal figure of death, offering little movement and remaining silent. His introduction is probably the bets on film, as a bell chimes and a pale hand enters the frame. It's one of the screen's bets supernatural moments.
While this segment is always rather harrowing, it's nice that some black humor was inserted in during the pawn scene with Old Joe(Miles Malleson), which plays like a scene from a James Whale film.
Scrooge's discovery of his own grave by conclusion of this visit is superbly handled, with Sim's character breaking down emotionally and realistically pleading for his life and vowing that he will be a better man. 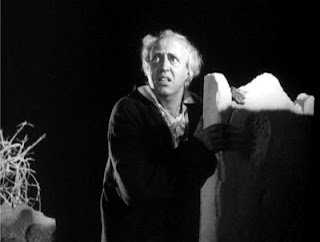 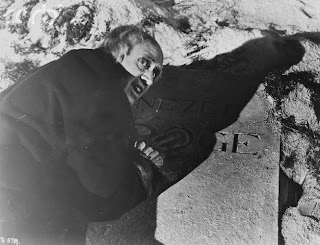 Of course, what follows is easily the most infectious and humorous of all of Scrooge's "awakenings" as Sim really lets loose, dancing about the room and portraying Scrooge, less as a madman, than a man who has just been set free from a lieflong nightmare. It's a joyous scene, both funny and poignant and it's doubtful anyone could have done it better than Sim. It was also a nice touch to include Kathleen Harrison's laundry woman as witness, adding further to the humor of the moment, and judging from her screams, was she channeling Uno O Connor?

One of the film's most poignant moments arrives when Scrooge goes to nephew's house and apologizes to Fred's wife "for having no eyes to see with, no ears to hear with all these years." It's beautifully spoken and it's doubtful anyone would turn out such sincerity. Brian Worth is a very likeable Fred, as he should be, but little credit is given to Olga Edwardes as Fred's wife, who really makes the most of this scene. The resulting polka is just the right capper to transition into Scrooge arriving at his office the next day, ready to inform Cratchit of his raise in salary. Also of note, for added poignancy, listen to the music used for this scene, the song being played by his friends at the party as Scrooge arrives. It's "Barbara Allen", the same theme used for Scrooge's sister, Fan, earlier.
I absolutely love Mervyn John's silent reaction here as it builds from complete astonishment and shock to a full smile, the man verging on tears. It's so hard to screw this bit up really, but like so much in this classic, it's handled with sensitivity and subtlety. Scrooge is less a man who learns to be "nice", than a man who has regained his soul. He even admits at the end, that he dosen't deserve to be so happy, but keeps on laughing, declaring he can't help it! This Scrooge is content to have found life again and is happy to start anew and make right his wrongs he's done his fellow man, and we know he will. 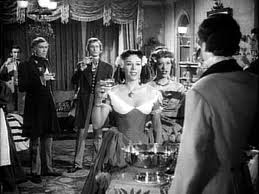 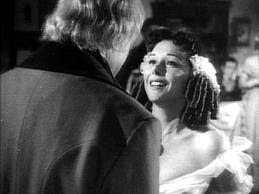 There's no way around it. This is the definitive Scrooge adaption, likely forevermore. With it's intellgent, more adult script, gritty quality and first class production, few have ever captured the world of Dickens better than this adaption, which still knows no peers. Sim's portrayal stands atop as one of the truly great performances in the history of the cinema, among many other fine and unforgettable performances in an unforgettable film.
Christmas is often known for the spirit of goodwill and pleasantry that pervades throughout the holiday, yet the best films about the holiday are often steeped in darkness. It's A Wonderful Life(1947), for example, is one of the darkest movies ever made, a reflection of the realities of the American middle class like no other. Dicken's story is no different, providing a literal black and white view into the holiday, revealing how we all might be a little like Scrooge deep down, but the spirit of humanity may yet remind us of our better natures if we allow it to do so. It's lesson is not so much about the holiday, than it is about how we all should consider our own lives. It's no small feat that this is probably the best ghost story ever made, but to carry such a timeless moral is akin to a leap. If any can profit by it's lesson, let it truly be said of him, as Tiny Tim and we have observed in this classic film, "God bless us, everyone." 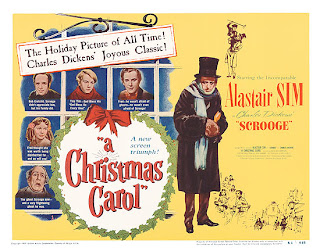