A Monster Movie For The Thinking Person

The title of this article came from a reviewer that had seen this film upon it's initial release. Too bad it dosen't quite live up to it. Frankenstein has always been one of my chief interests and i've sought out virtually every sequel and spin-off I could find, including Brian Aldiss' Frankenstein Unbound, one of the most creative takes on Shelley's novel. That book followed a politician who is sent back via timewarp to Geneva, Switzerland in 1817, where he discovers the characters of Mary Shelley's story, along with the author herself, living at the same time. It was a very good read and felt great for a cinematic adaption, and it happened 15 years after it's publication with Roger Corman at the helm. Corman had been absent from filmmaking for 20 years, and this was to be his biggest production yet, so the prospect was very exciting. 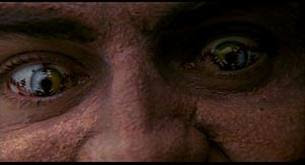 After a credit sequence straight out of one of Corman's Poe films from the 60s, the film begins, offering a Frankenstein parallel not seen in the novel. John Hurt portrays a scientist, named Joe Buchanan,  who creates a powerful weapon that he hopes will bring peace(the dream of many weapon designers through the centuries) and ultimately creates a monster. A black cloud forms in the atmosphere and sucks Buchanan and his car up into a time vortex, which takes him back to Switzerland in 1817. There he encounters Frankenstein(Raoul Julia), who is reffered to as "Dr. Frankenstein", a definite deviation from Shelley's novel. He also witnesses a nightly encounter between Frankenstein and his Monster(Nick Brimble), who is largely unseen, an old Corman trick if the monster proves uneffective. After some bizarre dream, where Hurt imagines he has destroyed the world, he views a court hearing that is from the novel. A young girl is blamed for the murder of Frankenstein's brother and sentenced to die. Mary Shelley(Bridget Fonda) is also present and informs Buchanan that she dosen't believe.
Following Frankenstein and attempting to make him confess his crimes, Joe encounters the Monster, who is quite an interesting creation, complete with two spinal cords and double thumbs(huh?) and stitched together eyes, for whatever reason. He demands a mate and Frankenstein refuses and shoots at him. Frankenstein appears very arrogant and cold in this version, sort of like the way Peter Cushing's Frankenstein was. There's nothing wrong with Julia, but it's difficult to equate his Frankenstein with the novel's. 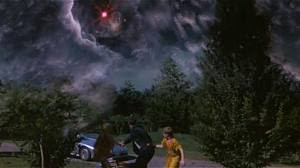 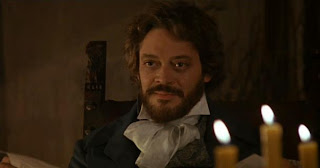 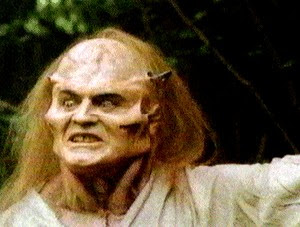 Frankenstein allows the girl to hang, and Buchanan is beside himself. Hurt searches for Shelley and reveals to her what she will create, and some of the most poignant dialouge arrives from their meeting. In truth, the idea of making the protagonist a scientist like Frankenstein is more symbollically powerful, and frankly, Hurt is excellent in this role. However, the humorous depiction of Buchanan making it with Mary(who practices free love) is a bit much. Worse, she 's dropped from the story thereafter!
Meanwhile, the Monster takes revenge on Frankenstein's fiance, Elizabeth(Catherine Rabett), by breaking her sternum. Frankenstein, quite mad now, decides to ressurect her, and it's fascinating how much of this film begins to resemble Mary Shelley's Frankenstein(1994) at this point.
She comes to life through the energy from Buchanan's car, which the scientist also uses to create another time warp, transporting himself, Frankenstein and the two creatures to some arctic future. The female monster shoots herself after seeing her ugly visage(though she's certainly better looking than Brimble) and the Monster breaks Frankenstein's back. Buchanan tracks him down, and in a truly bizarre scene, eliminates the Monster by conjuring up an electric light show(!) that burns through the Monster and destroys him. Buchanan., now alone, hears the Monster speak to him from the afterlife, I think, and journeys towards the ruins of a metropolis as film closes. 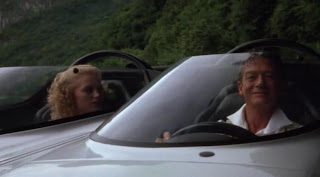 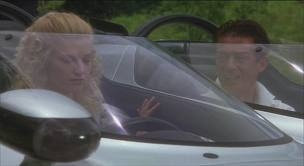 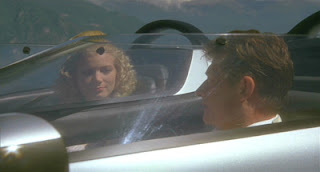 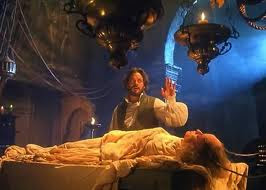 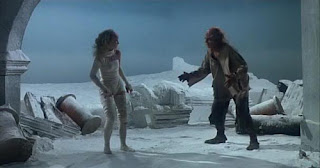 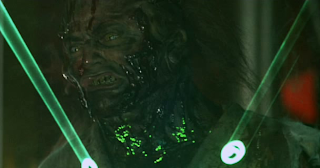 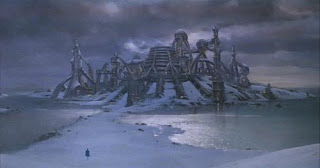 A very ambitious film for sure, Frankenstein Unbound is the definition of a curio-piece. The plot is just too zany not to be interesting to buffs, and the the film is largely well-acted and directed, even though some of the plot gets a tad silly. Besides the bit where Hurt sleeps with Fonda's Mary Shelley, there's also the image of Hurt driving her around in his futuristic car, which is good for a laugh. Lord Byron and Percy Shelley are also briefly introduced, though sadly, very little is done with them.
The Monster is a bizarre creation, though the makeup is fun, it's never believable. Frankenstein's Monster is supposed to be grotesque, but not to such an extreme that it would appear ludicrous. Why would Frankenstein decide to give him two thumbs and stitched together eyes and hope that he would fit in public? What makes this worse is that Brimble, while marginally effective, is often reduced to senseless violence. One hilarious moment involving a guard and a whistle, cannot be missed by those with a dark sense of humor. 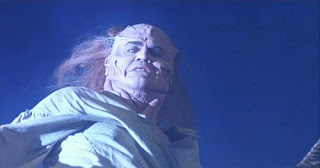 The literate Monster of the novel is much-missed, and one wishes that this was explored more, rather than focusing on the Monster's brute strength, as he rends and tears the populace of Switzerland. He even rips his own arm off at onbe point to use as a club against John Hurt! And about the Monster's demise, well, it's pretty weird. I'm guessing that this may be the evolution of Hurt's car in the future and that's why it recognizes him, but i'm just guessing. In the novel, the main character had an automatic rifle and that seems more plausible, but hey, the effects were good.
The acting is really better than one would expect from something like this, with Hurt delivering one of his possibly best performances as the scientist who wishes not to be Frankenstein. He handles the chores of both action hero and braniac rather well, and what a relief it is to see a thinking man's hero for once. He also knows how to speak certain lines with the right amount of relish, like when he says, "Meet my Monster!" as he brings Frankenstein into the time warp, or when he shoots the Monster and declares him an "Abomination in the eyes of God!", which is a frequent phrase in this film. Hurt's warmth and likeability, really carry the picture. 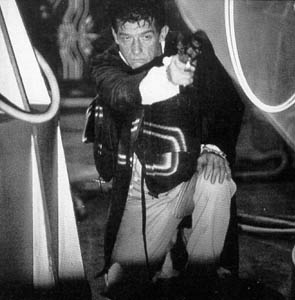 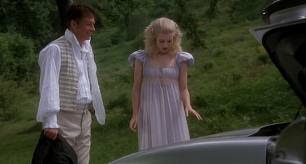 Julia is decent as Frankenstein, bringing a detached coldness that brings to mind both Peter Cushing and Charles Laughton in Island of Lost Souls(1933). He much have enjoyed going a little over the top, like when he says, "she LIVES!", which always makes me laugh. Unfortunately, his character needed more development and humanity that could make us understand what drove Frankenstein in the first place.
Fonda is decent as Mary Shelley, with an off-and-on English accent, and some modern sensibilities not keeping with the times, but she's not much of a distraction.
Corman proves he still can handle a good gothic with the requisite number of genre requirements, though the gore feels like an afterthought and out of place. Sometimes the picture is really lovely to look at and makes one wonder what a straight adpation would have been like, had Corman went that way with it. Humor abounds in several spots,but i'd like to think that with a talking car and so much else, that it was all intended. 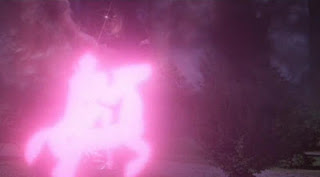 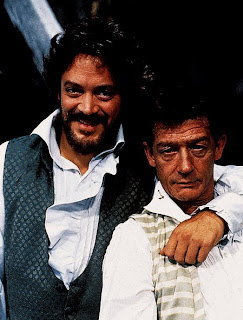 Frankenstein Unbound is very flawed and truly a bizarre film, but is entertaining enough to reccomend it to the horror and Frankenstein fan. It's not as brilliant as the novel, nor as some critics have claimed, but it's interesting and has enough ideas to set it apart from so many genre efforts. Plus, in the end, it makes you think, and that's more than most films are capable of nowadays. 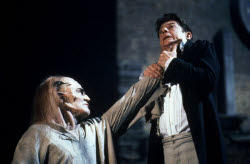 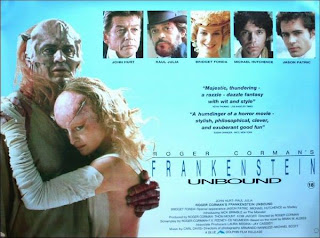