"Don't worry, Son! We Marines have no qualms about killing Martians!" 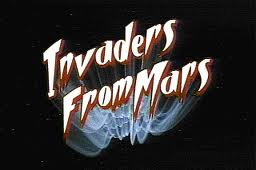 The least impressive of all the 80s science fiction and horror remakes, Invaders from Mars is a mess of a movie and another nail in the coffin of a once promising director. Hooper had made a name for himself with some legendary horror classics like The Texas Chainsaw Massacre(1974) and Poltergeist(1982), but seemed to phone in the majority of his other work, though he did release the occasional piece of insanity, like the balls to the wall, Lifeforce, from the same year.

The plot is virtually identical to the original, but most of what made the original so powerful and terrifying are dashed off in favor of nonsensical writing and erratic character behavior. The film begins well, with David Gardner(Hunter Carson) witnessing a spacecraft landing behind his home(this time looking the ship from E.T.) and begins to see strange changes in his family and friends when they go and investigate the supposed martian landing. In the original, the changes were more subtle, to emphasize the coldness of dehumanization, and that was frightening. David's dad was in the beginning, a nice guy and when he becomes quick tempered and violent and cold, it's a scary, yet believable change. In this version, those that the martians place a probe in, act very strange and would never fit into society, and that's the problem. They are supposed to be aiding the martians as spies and saboteurs! Who would trust people that eat raw burger covered in salt or swallowing a live bull frog? It's just plain silly. 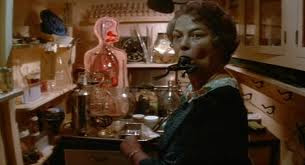 The nurse from the original, who is brought to a police precinct to care for the child, who has run away and is understandably frightened, is now a school nurse(Karen Black, mother of the child star of the film). There's nothing wrong with this update, except that her "buying" the whole plot so quickly is plain ludicrous, especially since the picture thought to dispense of the scientist friend, who acted as a rational balance to things in the original and supported the child's beliefs. That character becomes a smaller part and is not introduced until around the last act, and is quickly disposed of, though his demise is certainly memorable. It was probably wise to have the kid's dad be a NASA employee, because that works as a workable update, but so little is made of it, that it does little for the story.

It was also not wise to introduce the martians so early and even allow the child to enter their lair and escape! Even if the originals' invaders could be seen as a letdown, the build-up to them, added immeasurably to the suspense of the picture. It also dosen't help that the addition of a human villain in the form of Louise Fletcher as an over the top schoolteacher, does little to add any seriousness or dread to the production. While, the actress is genuinely funny on occasion and adds a little life to the proceedings, it just appears to be in the wrong movie.
The film does pick up considerably, when David and the nurse get to NASA and meet up with a marine general(James Karen) and explain the situation. This plays out fairly well and after the martians have sabotaged and blown up a ship ready to explore Mars, it even allows James Karen to speak the best line in the movie, which also happens to be the title of this review. His performance is a hoot and the ensuing invasion into the ship by the marines is genuinely exciting and was what I most favored when I was a child, as well. The aliens are goofy designs, kinda like giant metaballs(or ugly mr potatoheads, as the child puts it) and are sort of fun, and the supreme Martain Intelligence is one ugly slug, who even recieves a punch to the cranium from the kid. Like in the original, the marines set an explosive charge and get out as the spaceship takes off and explodes. Of course, it was all a dream, but it all begins again as David goes back to sleep. 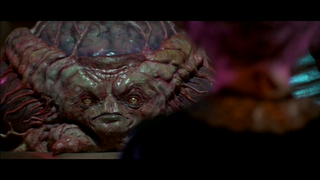 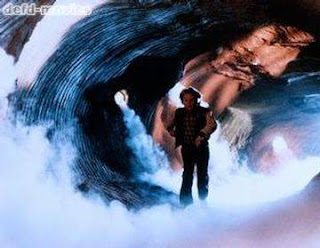 There's so much wrong with this picture, it's hard to find a proper place to begin. There's the indifferent acting, the mixed special effects, the non-existant direction and the weak script. Where to begin? Well, first let's look at the direction. Hooper was adept at handling nightmare scenarios and created an eerie world with The Texas Chainsaw Massacre and on very little money. He even proved himself with big-budget terror with Poltergeist, whose demonic entities proved he may have been the man to adapt Lovecraft. Unfortunately, there's little of his trademark atmosphere on display here and very little imagination. An opportunity was here to really capture that sense of childhood fear that he proved capable of in Poltergeist, while also adding a sense of dread, reminiscent of his earlier work. This is just dispensed of and has no style whatsoever and the pace drags.
The acting and writing are just as weak, the script offering largely ineffective updates to the original premise and underwritten characters. The parents are believable in the beginning, but are both too silly to take after the jump later on. The same can be said for Fletcher, who while funny, does not add much to the film's terror. Bud Cort is wasted as a NASA scientist who tries to reason with the martians, and only James Karen and Karen Black add any real depth to their characterization. Eric Pierpoint is decent as Karen's second in command, but has little to do, as does Christopher Allport as a heroic captain who leads a platoon through David's school. 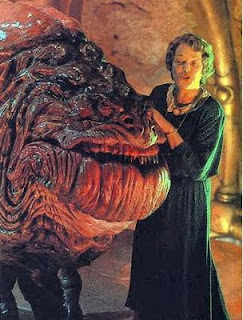 Hunter Carson is practically the albatross around this film's neck, offering a performance that has little range or worse, likeability. It's understandable that child actors have limited emotional recall and that is understandable, but when one compares the performance of Jimmy Hunt in the original, it becomes glaring. The new child actor is whiny and never credible and does very little as an audience identification character, though this may have fault with the direction as well, which as previously noted, is virtually non-existant.
The effects range from effective to cheezy(love the intestines thrown at the soldiers after blasting a martain!), but are largely unmemorable. Credit must be given to Stan Winston's team for trying something completely different in design, but there's nothing here particularly memorable. 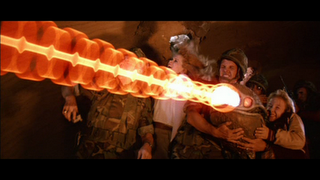 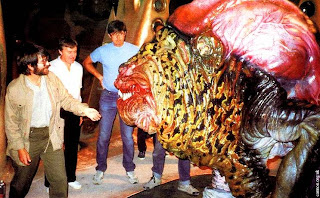 As a kid, this film was fairly enjoyable, but upon reviewing it again, years later, it's massively disapointing. The film grows and grows in tedium and leaves very little for the viewer to take with him/her after the film is over and none of this resonates as much as the original did. Some claim that each film is a product of their times, and that enjoyment is based on a certain age, but I don't believe that to be true. I was born in the 80s and prefer the original by a longshot and that's not nostalgia speaking, that's just objective criticism. Plus, that 1953 version has enough imagination to spare, where this one has very little going in or coming out. 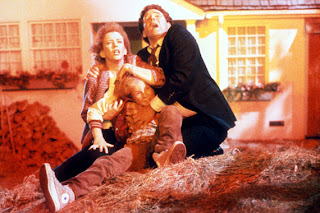