The Mystery Of The Man Who Conquered Death! 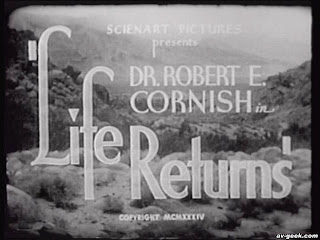 The biggest mystery of this film is why to view it in the first place. The era and the title are tantalizing, especially when one realizes that this was actually released by Universal Studios during their horror heyday! For a number of years I had read about this obscure curiosity and despite several bad notices in many genre reference guides, I still felt compelled to review it. Like any mad scientist, I should have left well enough alone. Very little is written about this film and that's understandable to a large degree, considering the abysmal quality of this b-product. The title and basic plot suggest something akin to Frankenstein, but it's actually a very boring melodrama about a scientist(Onslow Stevens) who is obsessed with ressurecting the dead, but does very little experimenting, instead opting to lay about on an old couch and allow his wife(Valerie Hobson, who was in Bride of Frankenstein, the same year) to die and his son(George P. Breakston) to live in the streets with an Our Gang type group, minus the charm and charisma. Stevens' scientist has to be one of the worst protagonists that I have ever had the misfortune to endure. He constantly feels sorry for himself and is too lazy and self-absorbed to help anybody, including his own family! When his son's dog is taken to the pound and gassed, he finally does something, taking the dog to be ressurected, though in reality it's just footage of Robert Corinish's experiments with terriers, where he successfully brought two dogs back to life. The conclusion resembles the sloppy sort of editing that one would associate with an Ed Wood production, sadly lacking the unintentional humor that makes Wood at least entertaining. The son is overjoyed and proclaims his father the greatest scientist of all time, even though he merely observed the actual experiment and has done nothing to justify such a claim! 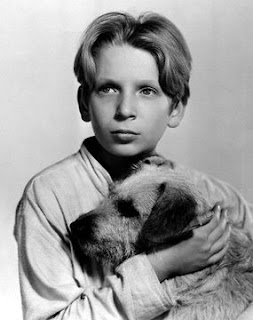 What an awful mess this film is and what a chore it is to sit through! The behind the scenes story was somewhat more fascinating, concering Robert Cornish's experiments with ressurection with dogs and the real footage inserted into teh film, is certainly the highlight. Unfortunately, the canines, whose blood was drained and then reinserted, had suffered some brain trauma(similiar to audiences after viewing this film, I guess) and werenot a complete success. He was to conduct experiments on human specimens, but was denied, as was the proposed follow-up to this film, which was to be about that experiment!

Even for the Universal horror completist, this is a tough film to sit through. The acting is hammy and dull, even though both Hobson and Stevens were capable of much better. Stevens actually portrayed a good mad doctor in the fun b-film, House of Dracula(1935) and Hobson starred in a few horror classics, besides the already mentioned, Bride of Frankenstein, she was also in Werewolf of London, that same year. The direction is non-existant, as is the action, which even the real life experiment fails to bring any level of excietment to the proceedings. A truly bizarre film that may appear tempting to the classic film fan, yearning for more delightful shudders and thrills from the studio who did it best, but fails to deliver on any level, even that of the unintentional comedy.For only the morbidly curious and the most masochistic of moviegoers. All other types need not apply. 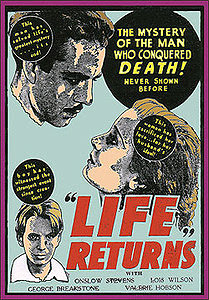