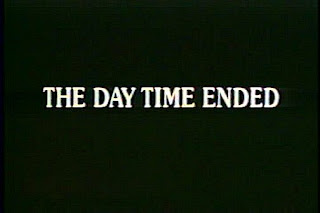 Originally shot in 1978 and not released for another two years, The Day Time Ended is one mess of a movie, often surreal and bizarre, feeling like most of it was written as it was being shot. In some ways, with it's inclusion of stop motion monsters and illogical situations, it feels reminiscent of films like Equinox(1970), which also took years to complete. It's difficult to describe the plot of this one too well, but i'll try. Jim Davis has a ranch in the middle of nowhere in a desert for no apparent reason. It's solar powered and fifty miles from anybody. He has invited family there and they find the place in shambles, probably due to some weird lights that appeared all over the place in the beginning. It's kind of talky for awhile, but this little girl keeps finding weird stuff like green lights that communicate with her and even a little stop motion alien that dances around her room! Nobody believes her that strange things are going on, until the little alien begins dancing in the grandparent's room and suddenly some little space ship appears and begins firing some pretty ineffective lasers. It can't get through a wooden door, but is able to stop bullets and a log being thrown at it. 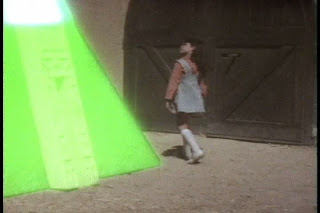 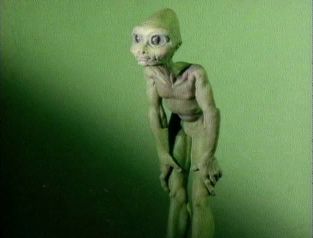 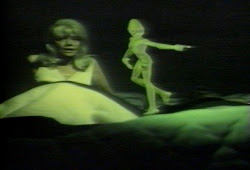 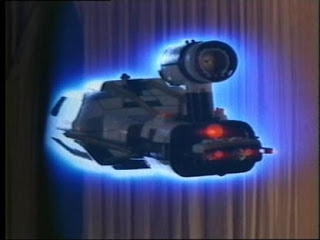 Meanwhile, Christopher Mitchum has been out of the action since the beginning and after seeing strange lights in the sky, decides to go back to the ranch. He adds nothing to the movie and seems to be added as some kind of filler, appearing at random moments, wrecking his car, riding a horse and turning up, quite illogically, at film's conclusion. At the ranch, a light show is taking place that gets old pretty fast. Luckily, some ridiculous stop motion monsters appear and get in a brief fight. They are right out of the school of Ray Harryhausen and are adequately designed by David Allen, who also helmed the creatures for Equinox, The Crater Lake Monster(1977), Laserblast(1978) and Planet of the Dinosaurs(1978). His monsters were the best part about those movies and they are here as well. The Day That Time Ended contains one of the greatest unintentionally funny moments in a b-movie of recent memory. At one point there's a knock at the door, which grandmother Dorothy Malone answers, only to find a stop motion green monster roaring at her! That scene practically made the entire movie for me. 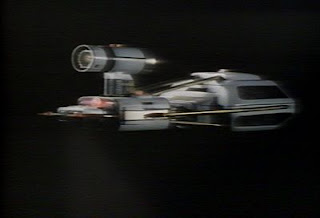 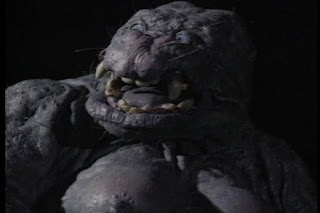 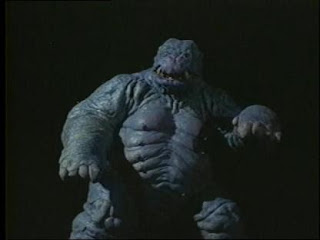 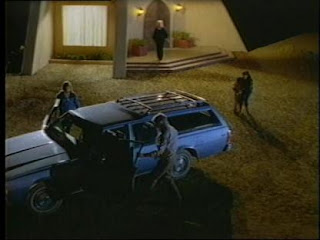 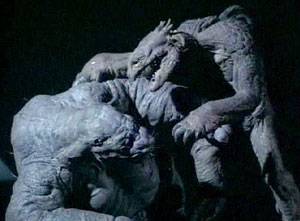 Sadly, the monsters disappear and soon a bunch of giant discarded vehicles end up in the backyard! All kinds of planes and spaceships, tanks and stuff that are really quite something to see, thanks to some lovely matte work. A sandstorm starts up and it takes the little girl and her hot mother away. It's okay, though, because even if most of us guessed the ending to be a typical downbeat 70s conclusion, we would be wrong. It's hard to predict anything in a movie like this, lest of all this ending, which has Jim Davis and the remainder of his family on horseback, riding from their home and finding the mother and the girl and inexplicably, Christopher Mitchum, who was not even caught in the timewarp! For some reason, Davis theorizes that they have been caught in a vortex and appears to know all about time travel now. The family is last seen happily riding towards some kind of futuristic civilization and that's it! 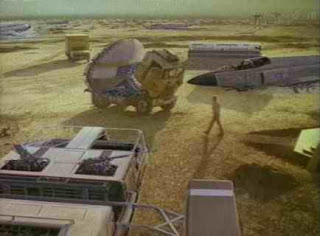 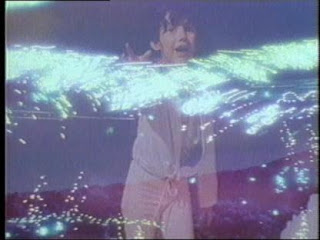 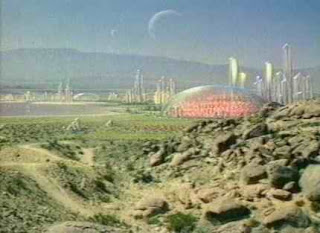 The Day That Time Ended is not a good movie, but a tough one to completely bomb, because it's just plain fascinating. There's alot of imagination at work here, but little to no cohesion. It dosen't help that the script is terrible and there's almost no characterization. Uusally, the acting can be mediocre in this b-films, but combined with everything else that's wrong with this film, makes that debit much more glaring. The idea of conflicting time zones and images of past and present combating one another is pretty cool, but is left unexplored, whether it was due to budgetary or creative restrictions. Bad movie fans should have some laughs, though, chuckling at the dumb character behavior or the monsters who appear out of nowhere towards the middle. There's nothing intelligent or thought provoking here, but stop motion fans and devotees of bizarre cinema should give this a glance. It's perfect fodder for the heckler crowd and i'm sure even if you are not part of that group, you will be by film's conclusion.