The Ballad Of Franco Nero 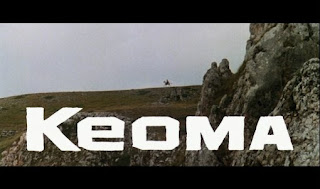 The western was a dying artform by the late 1970s and it's most violent subgenre, those created in Italy and dubbed "Spaghetti Westerns" for their graphic violence and country of origin, were fading out in favor of crime and horror pictures. I was always fond of the Western for it's mythic characters, larger than life locales and complex plots, which were found in several of the genres classics. Of course, when I was younger, it was the gunfights and masculine nature of the films that also attracted me towards them. In High School, the films of Clint Eastwood and Sergio Leone were among the hallowed names of my small cadre of friends. We sought after many similiar titles and it wasn't long until I came across the work of Franco Nero. He was one of the most prolific of Italian stars and had appeared in tons of pictures from the 60s through the 80s, often as a leading man. He was most famous for his role as Django(1966), a mysterious gunfighter in the Man With No Name mould, who carries a coffin that contains a machine gun! It was a fun movie that led to several sequels, but was never a true classic of the genre. What Nero should have been more recognized for was the unique and moving western that was Keoma(1976), considered by a great many as the last great spaghetti western. Borrowing elements from the recently released, The Outlaw Josey Wales, as well as touches of Peckinpah and Leone, what emerges is a lost treasure that has been waiting to be unearthed for years.

Keoma begins with the title character returning from the Civil War, having fought for the Union Army. He is played by Franco Nero, looking rugged and imposing under a mane of hair and a thick beard. Keoma is a half breed and was adopted by his father, after his people were senselessly massacred. He finds his town in shambles, a nightmare place painted in blackness with death around every corner. A plague has struck and only the dead are allowed to leave the town, which has been taken over by a man named Caldwell(Donald O' Brien). Keoma guns down several of Caldwell's men after they shoot a handful of civillians, and takes with him a beautiful young woman, Lisa (Olga Karlatos) who rides with him for most of the film. Keoma discovers that his brothers ahve taken to the other side and still have reservatiosn against their half brother. Keoma visits his father(William Berger) who is disgusted by all that has gone on in the town and wishes that someone would put a stop to it. The town has been reduced to fear and cowardice, including Keoma's childhood mentor, George(Woody Strode) who is now a drunk. Having enough of it all, Keoma devises a plan to get in medical supplies and proper law enforcement, sending George and the town doctor(Leonardo Scavino) out to retrieve them. When they return, Caldwell's men attempt to confiscate the items and charge the populace, causing Keoma to waste the men and send for Caldwell who returns with an army of gunslingers. A terrific shootout erupts, that pits Keoma, his father and a re-energized George, against the marrauders, which leads to nearly all of Caldwell's men getting killed. Keoma is forced to surrender after George is killed and his father is taken captive, though his father is shot dead by Caldwell anyway. Keoma's brothers return and kill the rest of Caldwell and his men and leave Keoma trussed up, looking like Christ in the town square and decale the town as their own. However, Keoma is rescued by Lisa and they run off, with the three brothers behind them. An unnerving showdown erupts, as the brother stalk each other down, admist the cries of lisa who is in the midst of giving birth. The three brothers kill each other and Lisa expires from childbirth, as her child is born. An old woman declares the child will die, but Keoma boldly states that "He can't die and you know why? Because a man who is born free can never die." And with that Keoma rides off into the sunset, like all great western myths.

Keoma is one hell of a western. It has an epic scope that sets it apart from so many of it's type and somehow remains unique and effective, weaving an emotional spell over the viewer that is quite beguiling. Director Castellari directs the film in a dreamlike fashion, with an emphasis on the rural landscapes and on the main character's lonely, tortued persona. The flashback device utilized serves as excellent juxtaposition between the scenes, always painted in brighter colors and often within the same frame, serving to contrast with Keoma's past and present, never fully bright, but never as dark, either. There's a slight supernatural element at work in the form of an old witch woman that acts as a moral guidance for the character, reminding him of his heritage and who he is. The music utilized is not the Ennio Morricone brand of operatic grandeur that we know and love, but something rather different. A strange female singer warbles the ballad of Keoma throughout, acting as a Greek chorus to the proceedings, with Nero himself delivering a husky barritone at points that almost felt like he was channeling Peter Steele. It's certainly oft-putting, but actually works, and while i'm sure i'm in the minority with those sentiments, the music actually helps to enhance the already dreamlike visions and epic vistas that the filmmakers were striving for. 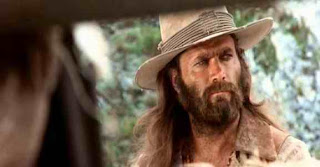 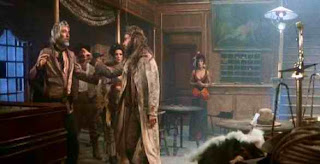 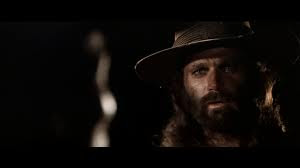 The action scenes are just plain awesomeas well, delivering a roughness that is part Peckinpah, complete with Slo-mo, and part Leone with it's stylized nature. The showdown against Caldwell and his men is one of the great forgotten gunfights, terrifically shot and exciting as hell. Keoma utilizes every weapon in his arsenal, all period accurate for a change, including this mean sawn off double barrelled shotgun that he uses with graphic efficiency. 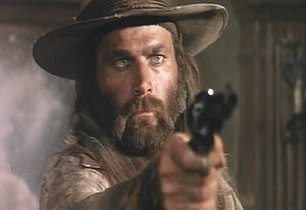 Franco Nero delivers one of his finest screen performances in this film as Keoma, acting as much with his fists and guns, as with his amazing eyes that convey as much power as they do emotion. Nero provides his own voice in the dubbed print and while it may sound funny to hear an Italian accented half-breed Indian, Nero performs with both intensity and power. Unlike other gunfighters, there's not much gray area with the character of Keoma. He is a good guy who belives in doing the right thing and the freedom of all people, a true hero for the time and one that is just as relevant today. His look is reminiscent of classic gunmen like Wild Bill Hickcock and his demeanor, a combination of world-weariness and determination make him one of the most complex and interesting western protagonists. In some ways, Keoma is almsot like a Christ figure, arriving in town to free the people from oppression and sin, bringing life back to the populace and hope. The ending is than appropiate, as Keoma chooses not to stay behind, knowing his task is complete and life will begin again, in the form of the child. He needs to ride onward, finding the freedom and way of life that he desires for himself, as well as everyone else. Nero is more savage than Clint Eastwood in the role of lone gunman, adding a dimension of pain and alienation that was rare among such heroes. It's a unique role and a different performance that warrants repeat viewings and analyzation.


The rest of the cast are very good as well, particularly Berger as Keoma's father, a sharpshooter like his son who has a great moment where him and his son catch up on old times by shooting targets in the backyard while discussing about life and the futility of war! He adds immeasurably to the great climax, as does action movie veteran, Woody Strode, who has a good role as Keoma's old friend, who is a master with a bow and arrow and carries a busted guitar, playing it on three strings. His death scene has to eb seen to be believed as he bellows out a war cry and strangles his attacker, even after being shot multiple times by a Colt revolver!Olga Karlatos is very gorgeous, but does not have as much to do, sadly. She is best remembered as the babe who gets the splinter in the eye in Lucio Fulci's Zombie(1979), which i've previously reviewed on my blog. She looks great and her lovely green eyes are put to startling effect, as they look on at the carnage that ensues throughout the picture.

Keoma is one of the most underrated westerns ever made and certainly one of the most criminally underlooked of the violent spaghetti subgenre. Franco Nero made many action movies in his career, but none carry the power and relevance of this picture. It's strange and different and probably not for all tastes, like so many Italian western films, but it's got ideas and is one of the few films that could successfully straddle that line between arthouse and action.  Underground and cult fans have long since praised this as a lost classic and i'll concur with them by proclaiming that Keoma deserves it's reputation as the last great spaghetti western.